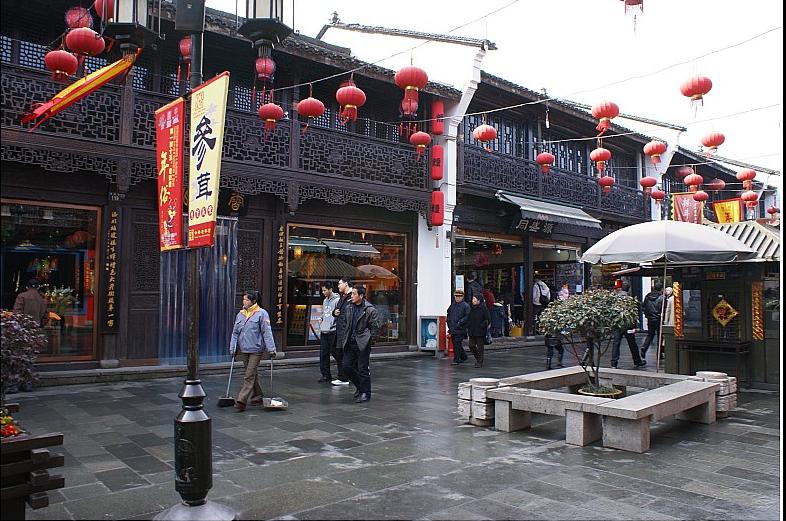 This is the epitome of the history and culture of Hangzhou and took shape after the Southern Song Dynasty assumed Hangzhou as its capital, after which there was temporary prosperity. Now there are many shops mainly centered around teahouses, drugstores, silks, baked goods, foodstuffs, curios, calligraphy and paintings, plus other noted shops such as Huqingyutang Pharmacy, the Wanlong Ham Store and the Wangxingji Fa Store. It is the most famous cultural and historic street in Hangzhou which is preserved very well. It located at the foot of the scenic Wushan Hill and close to the famous West Lake.After the Yuan, Ming and Qing Dynasties,the Hefang Street is still prosperous as a marketplace today. Hundred yea ago, Hefang Street was the heart of Hangzhou and the commercial center in ancient China. Qinghefang historical street is a great place for eating and shopping. It is known as the Snack Street for the divee food it serves. Except serving the food all around the country, it highlight the local flavor at the same time. Food junkies will love this place. People will find a variety of Chinese crafts in Hefang Street, such as land-blown sugar candy, paper-cutting and hand-made dough figurines. It's full of art hawke, candy sculpto, pillow shops, caricaturists, old-fashioned movie playe, storytelle, boai shops, teahouses and so on which make Hefang Street charmingly lively.