Wuhan Tianhe International Airport (IATA: WUH, ICAO: ZHHH) serves Wuhan, the capital of the Hubei province, People's Republic of China. It was opened on April 15, 1995. The airport is located in Wuhan's suburban Huangpi District, around 26 kilometres to the north of Wuhan city center. It is the busiest airport of central China as it is geographically located in the centre of China's airline route network. The airport is a focus city for Air China, China Eastern Airlines and China Southern Airlines. The airport has flights to international destinations such as Bangkok, Kuala Lumpur, Los Angeles (via Beijing), Paris, San Franscisco(same plane via Shanghai), Seoul, and Singapore.

The name Tianhe can be literally translated as "Sky River"; it is also one of the old names for the Milky Way. 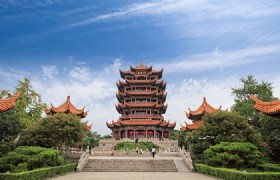 Take this one day Wuhan tour to catch a glimpse of the most symbolic attractio of the c...