Mazu Goddess is a folk belief spread among the coastal cities of China. Firstly originated in Song dynasty, Mazu represents the spirit of sea culture for Han Chinese. In ancient times, before they started sailing in the sea, everyone would worship Mazu first, hoping and wishing for a danger free journey. Not only that, they would keep a statue of Mazu on their ship during the journey. An old saying could speak for such phenomenon very well, “Where there is sea, there is Chinese; Where there is Chinese, there is Mazu.” As the goddess of the sea, she has been believed and worshiped for centuries. 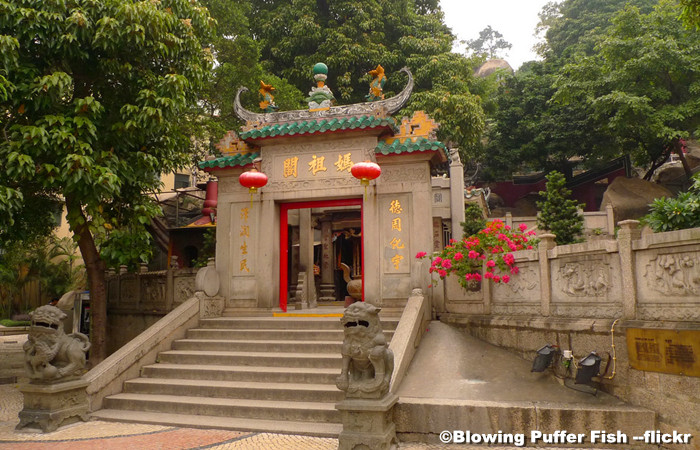 A-Ma Temple is located on Hesitating Peak of Luann Island, the highest spot of Macau. It was built on October 28, 1998, designed by the president of Institute of Chinese painting, symbolizing the return of Macao in 1999. As a former Portuguese colony, Macao was administered by Portugal from the mid-16th century until late 1999, when it was the last remaining European colony in Asia. Here stands the tallest statue of Mazu Goddess, with a height of 19.99 meters. 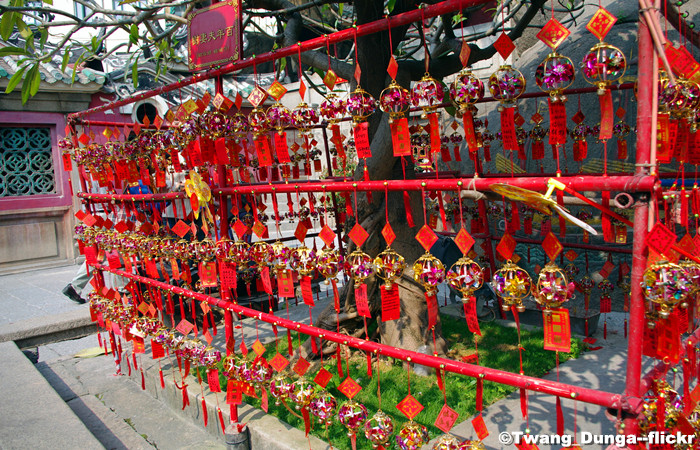 The statue is made from 120 pieces white marbles, and the face of Mazu is carved from a complete while marble. Weighted more than 500 tons, it is pure and while, with a nice and kind expression, looking to the sea in the distance, guarding the city. Because it is on the top of the city, tourists can see her whether they are on sea or on land. After a short look at the statue, we are at the Mazu Goddess Palace. It covers an area of 7000 square kilometers, feeling so solemn and majestic. There are walking aisles, pavilion-like mountain gate, worshiping altar, great hall and some other buildings. Every detail is carefully designed with great wit. 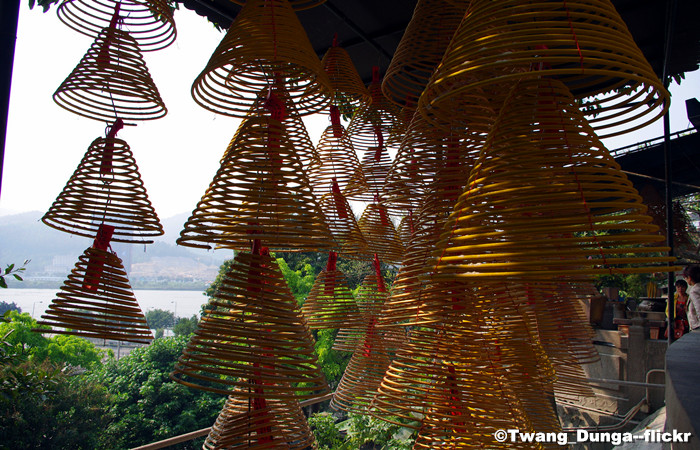 Right besides the buildings, they also built the bell tower, Drum tower and beautiful gallery. The walking aisle is formed with six sets of stairs, with relief carved right in the middle. So many different patterns, double Kirins, two lions playing with balls, tiger roaring, five happy cranes, two phoenix towards the peony, two dragons playing with marbles, and other interesting patterns.

The mountain gate is a memorial archway with stone and knotty-wood structure, with two mighty stone lions sitting besides. At the front gallery locates a pair of cyan stone pillars. Stepping inside the hall, the rich color of paintings on the wall is so dazzling, pretty amazing to see so many colors with perfect match to the room.

Back when Macau was only a fishing village, many fishermen would come to the shore and celebrate the Spring Festival. They have great faith in Mazu goddess and worshiper her a lot. Especially on the Spring Festival Eve, they would pay a visit to Mazu Temple.Once the Spring Festival was over, they came back to the sea with the blessing of Mazu Goddess. You might wonder if there is real goddess of the sea, but sometime it is faith matters.