Langdeshang Village is located deep in the mountains of Leishan County, Guizhou Province, and it is a famous Miao village. It was also the first destination for us to visit Guizhou. Fortunately, the CCTV was recording a Miao nationality program on the day we visited the village.

That day, everybody was well dressed up to participate in the show! Pretty girl and a young wife who wear bright Miao nationality clothing, and a variety of fine silverware; the young men were wearing black clothes, and rake cap on the head; even the children were also wear beautiful costumes of the Miao nationality to participate in the performance.

Eight older elderly in the village played big Lusheng in the square, then the men, women and children walked and danced around the old Lusheng players, the most outer side were young girls and women, the most inner side were four of the most beautiful girls in the village. Their performance is not complicated, relatively single movements, and can be said to be that old original Lusheng dance without any modification, but all reflect the gorgeous of the dance, amazing!

Because CCTV came and recorded program in the village, most villagers got up early in the morning and worn their festive costumes, waiting in the square of the village.

The villagers were waiting for the performance, and there were beautiful Miao nationality women, people see dazzling!

The children were also put on the Miao nationality clothing and waited for the performance.

The older elderly played big Lusheng in the square, and the longest is 4-5 meters long, it was in the particularly important festival when the older Lusheng players will performance, so this time’s performance was rarely seen.

At the beginning of the show, the eight older Lusheng players first played Lusheng at the venue.

Then, all the young and old in the village danced with music, arranged in four rows.

The performances were held in the small square in the village, the ground of the square was paved with small stones, very unique.

The outer side of young women

Four most beautiful girls in the stockade were standing in the inner side.

All of them are very beautiful.

The silverware on the body and head of the Miao girls are very beautiful.

The Miao girls are the highlight of Lusheng dance performances.

The following is the Lusheng performances of the four beautiful girls and boys in a small river.

After the show, Miao villagers sold their exquisite embroidery.

The appearance of the village 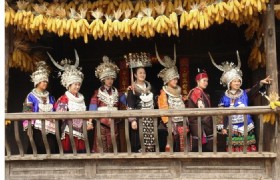