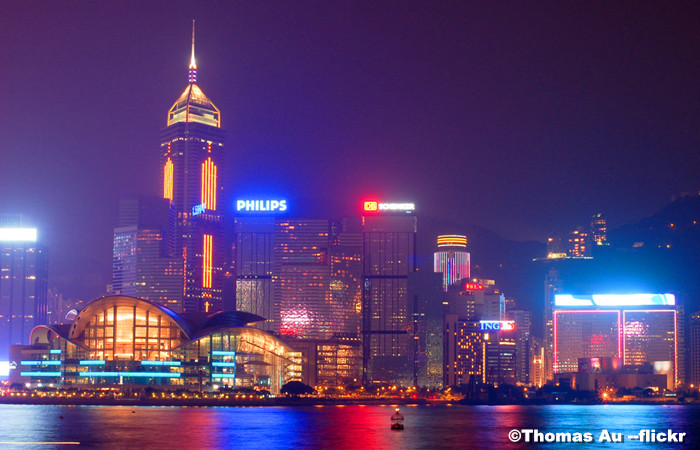 Victoria Harbour is the port and water between Hong Kong Island and Kowloon Peninsula, built by the British to commemorate the British Queen (Victoria), and is the largest harbor in China, as well as the worlds third largest after the United States’ San Francisco and Brazil’s Rio de Janeiro. The broad waters of Victoria Harbour and beautiful scenery, daytime clear water and blue sky and white clouds, boats and ton ships out of harbor without disturbing each other, to the night will be more bright lights, creating a spectacular night view of the “Pearl of the Orient”. Hundred years, the role of Victoria Harbour is far beyond a normal port, it is one of the important natural resources, and is a part of the life of Hong Kong people, and was also the first stop I went to visit Hong Kong.

In fact, the Avenue of Stars which is located in the east of Tsim Sha Tsui, Victoria Harbour is a waterfront promenade following the example of the Hollywood Walk of Fame, in recognition of the outstanding personalities of the Hong Kong film industry.

International martial arts star Bruce Lee's statue, where there are always a lot of foreign tourists to come to photos.

After nightfall, Victoria Harbour, lighted, and embraced. Both sides of the night scene are one of the world famous tourist spots, considering it one of the five world's three night view (along with Japan’s Hakodate, and Italy’s Naples).

The Clock Tower was built in 1915, and was the original part of the old Kowloon - Canton Railway train station. Now it has been listed as a declared monument of Hong Kong.

Night view of Victoria Peak, but unfortunately that day is not transparent.