Macao Fisherman's Wharf is Macau's first theme park as well as a shopping center modeled on Euramerican fisherman's wharfs. It has an area of over 111,500 square meters (about 28 acres), of which 40 percent is reclaimed from the sea. The complex includes over 150 stores and restaurants in buildings built in the style of different world seaports such as Cape Town, Amsterdam and Venice, six rides, a slots hall, a 72-room hotel, and a casino. 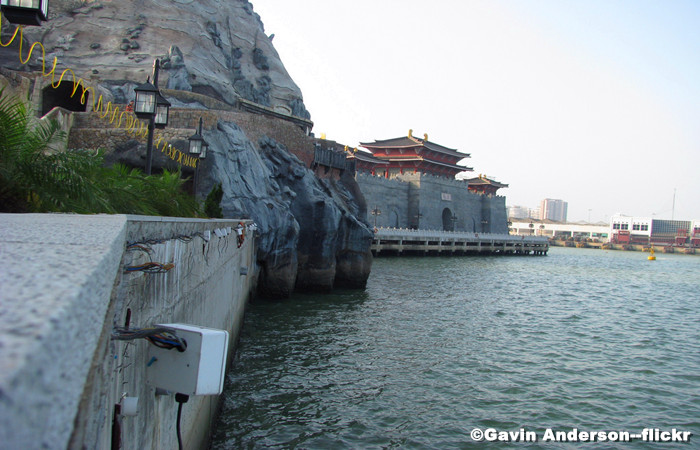 The wharf was inaugurated on December 31st, 2005, in the presence of Ho Hau-wah, the chief executive of Macao, and Ho Hung San. On December 23rd, 2006, it was opened to the public formally. Now, it is rapidly emerging as a popular attraction.

With different characteristics, Macau Fisherman's Wharf can be divided into three main sections: Dynasty Wharf, East Meets West and Legend Wharf. Dynasty Wharf is composed of many Chinese towers, which are built in the imitation of the Tang-style. Tang Dynasty Fortress is a historian discovered an ancient fortress dating back to the Tang Dynasty. There, you can experience the life you saw on TV.

Macau East Meets West mixes together oriental traditions and features of western design, including a 40-metre (about 131 feet) tall man-made volcano, waterfalls, architectures of Greece, an ancient battleship, an Arabian children's play area, a Roman Amphitheatre, a characteristic shopping mall and exhibition facilities. Vulcania is a 40m tall replica volcano which 'erupts' every evening and inside of which the 'River of Fire' white-water and 'Dragon Quest' rollercoaster rides are housed. The exterior of Vulcania includes walkways styled on the Potala Palace in Lhasa, Tibet. Another noticeable spot in East Meets West is Aladdin's Fort, an attraction in the style of a middle-eastern fort which is home to a variety of children's funfair rides.Legend Wharf is equipped with all kinds of recreational facilities, such as a High-tech Games Center, Water Performance Arena and a Video Games Center.

With night approaching, you may see wonderful night scenery of the small island. Or if want a place to wash your tiredness, it is worth noting that the wharf sits right beside the Sands Macau, which is another place to further your visit. Sands Macau, which was named after a hotel, the Sands Hotel and Casino in Las Vegas, is the largest and the first U.S. owned casino in Macau. It has 740 table games and more than 600 casino slot machines. Sands Macau is, without doubt, a magnificent casino center for visitors.