Each city has its history. The history of Sanjiang can be traced in Sanjiang Dong Village. It is a special and quaint village where the old custom and tradition still remains. Most of the residents here are Dong people, so the main reason to visit here is to admire the spectacular Dong architecture, the breathtaking natural scenery and the splendid culture of Dong ethnic group.

Wooden drum towers are one of the ethnic features of the Dong Minority culture. Mapang Drum Tower is a typical drum tower in Sanjiang situated in Mapang Village, 16 miles away from the county. Built in 1928, it has nine floors and is 16.4 yards high. Sanjiang Drum Tower, which was completed in 2002 as a token of congratulation when it was the fiftieth anniversary of Sanjiang Dong Autonomous County, is most famous among all ethnic minorities' drum towers in China. It provides the local Dong minority with a good site to undertake ethnic assemblies and festival cerebration. With the functions Dong minority culture's symbol and a famous tourist site, Sanjiang Drum Tower has made four records among its sister constructions. Hailed as "the first Dong drum tower in the world", Sanjiang Drum Tower was exquisitely constructed by a folk architect team led by Master Yang Siyu who was of Dong minority.

Shaping like a pagoda, the tower was engraved with dragons and phoenixes on the eaves. A sculpture of crane is standing on the top of the tower which symbolizes auspiciousness. The entire structure is joined together with redwood, without a single iron nail. It is said that the Dong architect drew the blueprint with only a carpenter's square and a bamboo marker. The body of the tower is made up of wood without using any nail but marvelously keeps solid. It has four floors of viewing stand, with the highest one located at the 25th floor. On the foundation support of the tower, exquisite carvings reflecting the Dong's daily life can be seen.

The Wind and Rain Bridge is another feature of the Dong minority's architecture. The Dong people prefer to build their houses on the slope of the mountains near rivers and streams due to the Chinese fengshui. When coming to a Dong village, the first amazing architecture that would strike your eyes is the wooden wind and rain bridge.


The most well-known one in Sanjiang is Chengyang Wind and Rain Bridge. Located in the Chengyang Village of Sanjiang County, the bridge spans the Linxi River. Thus it is also called Linxi Wind and Rain Bridge. Built in 1916 and was once damaged by super floods, it is now well-preserved and still keeps firm. The bridges were all done by the local people without blueprint and the technique was handed down by oral transimission through ages.
If visitors want to see more of the local bridges and drum towers, they may go to the Dong Ethnic Eco-museum. Centered on the Dong Ethnic Museum in the county, the eco-museum consists of nine Dong villages including 28 drum towers and 13 bridges, where visitors can have an eyeful of the Dong architecture. 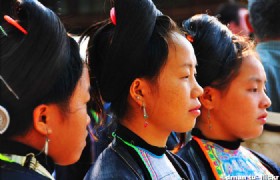