Shaoxing, a city in Zhejiang Province, is famous for two things: rice wine and calligraphy. The city celebrates its calligraphy heritage every spring with the Lanting International Calligraphy Festival.

About 13 km from Shaoxing, the Lanting (Orchid Pavilion) is famous for "The Preface to the Orchid Pavilion Anthology" (the opening words to A Collection of Works Written in Lanting), written by Wang Xizhi, the well-known calligrapher of the Eastern Jin Dynasty, in 353 AD.

The anthology is regarded one of the most treasured pieces of calligraphy in existence. Therefore, the Orchid Pavilion has been well reputed as a sacred place of calligraphy for over 1600 years.

Today, Lan Pavilion has been developed into the Lan Pavilion Park which is very popular among visitors from home and abroad. The garden is covered with luxuriant trees, crystal-clear streams and dense bamboo groves.


There are also several relics on view, such as the Qushui Liushang Pavilion, Goose Pond Pavilion, the Youjun Ancestral Hall, the Lanting Tablet and the Ink Pool.

Every the third day of the third month of the Chinese lunar calendar, in March or April of the Western calendar, Lanting International Calligraphy Festival attracts calligraphy lovers from home and abroad. The festival generally opens at the Memorial Temple of Wang Xizhi, a cultural center in Lanting, a suburb of Shaoxing. The festival honors Wang Xizhi who wrote, "Lanting Xu," which is the most famous piece of calligraphy work ever. Wang Xizhi is known as the Saint of Calligraphy.

Calligraphers come from around the globe to honor him on festival day. As might be expected at a calligraphy festival, events center on this ancient art. Calligraphy demonstrations dominate the festival. Exhibitions of calligraphy can be found at both the Shaoxing City Square and the Shaoxing Museum. Festival-goers can also attend a re-creation of "Qu Shui Liu Shang", an ancient game that features writers floating cups of wine on a stream. Where it stopped the writer nearest the cup had to drink the wine and compose a poem. This is how Wang Xizhi wrote "The Orchid Pavilion", one of his most famous works.

Except profound culture deposit, delicious food also attracts far-away tourists. The most standout feature of food found in Lanting is that much of it utilizes a local delicacy called Shaoxing Yellow Rice Wine. This cooking wine is made from a special variety of glutinous rice and adds a very distinctive flavor to all dishes. In general, Shaoxing food tends to be light and crisp. Not much oil is used in the cooking process so the natural flavors of the fresh ingredients are upheld. You will easily find freshwater fish, shrimp, poultry, and beans featured in the local cuisine. Be sure to try Shaoxing Chicken which is prepared by marinating the breast meat in the local wine.

There are many interesting sites in which tourists can enjoy themselves. In addition, it’s very convenient to get to hot spots like the East lake, Zhou Enlai’s ancestral home etc. Do not miss this rich city. 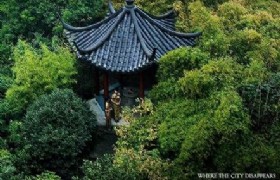