The Mogao Caves or Mogao Grottoes, also known as the Caves of the Thousand Buddhas, form a system of 492 temples 25 km (16 mi) southeast of the center of Dunhuang, an oasis strategically located at a religious and cultural crossroads on the Silk Road, in Gansu province, China. Situated at a strategic point along the Silk Route, at the crossroads of trade as well as religious, cultural and intellectual influences, the 492 cells and cave sanctuaries in Mogao are famous for their statues and wall paintings, spanning 1,000 years of Buddhist art. 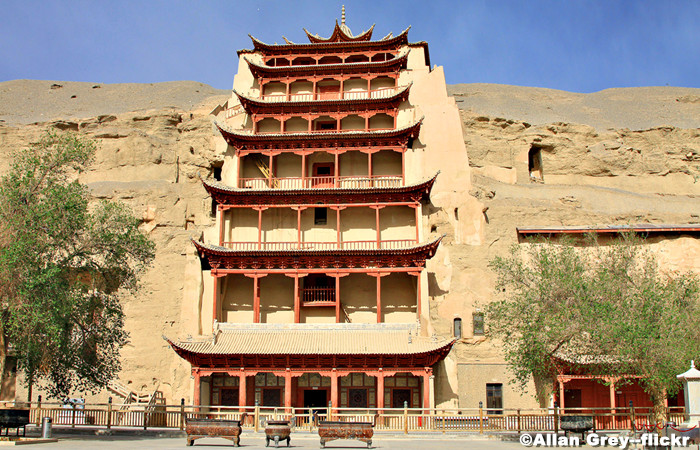 According to Tang Dynasty records, a monk had witnessed onsite a vision of thousand Buddhas under showers of golden rays. Thus inspired, he started the caves construction work that spanned ten dynasties. Mogao Caves are commonly known as the Caves of a Thousand Buddhas.

A common motif in many caves is the areas entirely covered by rows of small seated Buddha figures, after which this and other "Thousand Buddhas Caves" are named. These small Buddhas were drawn using stencils so that identical figures may be replicated. Flying apsaras, or celestial beings may be depicted in the ceiling or above the Buddhas, and figures of donors may be shown along the bottom of the walls. 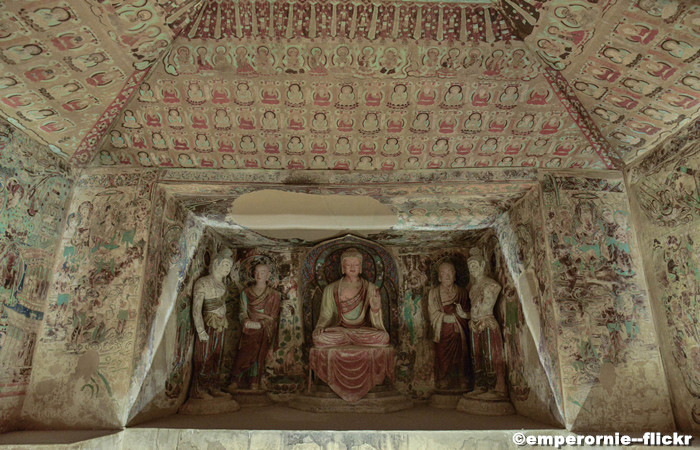 The paintings often depict jataka tales which are stories of the life of Buddha, or avadana which are parables of the doctrine of karma. Buddhist art has its origins in India. Mogao sculptors improvised where the rock surface did not work well under their chisels. They placed clay statues in front of the cave walls, carved relief murals as backdrops, and painted the sidewalls and ceilings with art decors. The largest statue is 34.5 meters (113 feet) high and the smallest a mere 2 centimeters (0.79inches) high. As evidence of the evolution of Buddhist art in the northwest region of China, the Mogao Caves are of unmatched historical value. These works provide an abundance of vivid materials depicting various aspects of medieval politics, economics, culture, arts, religion, ethnic relations, and daily dress in western China.

The unique artistic style of Dunhuang art is not only the amalgamation of Han Chinese artistic tradition and styles assimilated from ancient Indian and Gandharan customs, but also an integration of the arts of the Turks, ancient Tibetans and other Chinese ethnic minorities. Many of these masterpieces are creations of an unparalleled aesthetic talent.The discovery of the Library Cave at the Mogao Caves in 1990, together with the tens of thousands of manuscripts and relics it contained, has been acclaimed as the world’s greatest discovery of ancient Oriental culture. 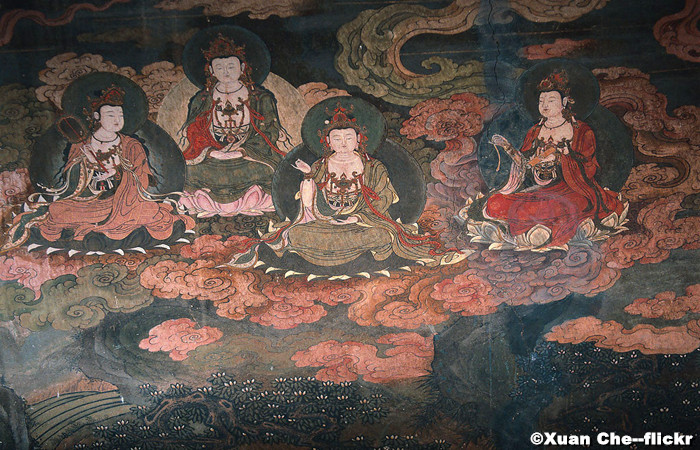 This significant heritage provides invaluable reference for studying the complex history of ancient China and Central Asia. Large number of documents dating from 406 to 1002 CE were found in the cave, heaped up in closely packed layers of bundles of scrolls. The Library Cave also contained textiles such as banners, numerous damaged figurines of Buddhas, and other Buddhist paraphernalia.