China is one of the countries that boast to have the richest and largest bamboo sources in the world, thus also known as “The Kingdom of Bamboo”. Along the thousand years of history since ancient times, bamboo has been playing an important role in Chinese daily life and now it has become an unique culture with profound meaning.

Archaeologists have proved Chinese started using bamboo around 7000 years ago, weapons like arrows and darts, and some other enterainment tool, all made from bamboos.Poems and literatures about bamboos are many. The famous poet Sushi from Song dynasty once said, I would rather eat every meal without meat than live in a house not built with bamboos. This could be a great evidence showing what bamboo means in people’s life, both materially and spiritually.

You might wonder, why Chinese love those green sticks that much? When they see bamboo, they see beyond the looks. Bamboo is tough, straight and unyielding, always green whether it’s sunny spring or snowy winter. Just like the tradition values of Chinese, life is hard but you need to be tough and never give up that easily.

As the homeland of the giant panda, Sichuan province has rich amount of bamboo, mostly in the southern part. One adult panda could eat up 30-70kg bamboo, no wonder now Sichuan is the only place that has the most pandas. In recent years, bamboo seeing tour is getting more and more popular among tourists. There is a few nice bamboo touirsts spot all over the country but my favorite one is the Anji Bamboo Seas.

It might sound new to you but if you once watched the film Crouching Tiger Hidden Dragon directed by the Oscar winner Ang Lee's, there is a scene the characters fighting inside the bamboo forests. That is the Bamboo the Anji Bamboo Seas. It looks beautiful on screen already but when you really see it, you would still be amazed from head to toe.

Anji Bamboo Seas is located in Anji county of Zhejiang pronvince, covering an area of more than 6 milion square meters. The tallest bamboo could reach up to 13 meters, weighted as 120kg or so, regarded as the King of Bamboo. There is a giant rock at the entrance of the tourists zone, which was once used for Crouching Tiger Hidden Dragon.

Walking through the quiet bamboo forests, with gentle breeze brushing on the face, my chaos mind studdenly is at peace now. No worries at the moment. I take a deep breath, taking it all in. Want to slide above the forests? You got it. All you need to do is to buy a ticket for ropeway then you adventure is all set. Sliding fast or slow, it’s all up to you. Be careful in case you might hit some eagles. Besides bamboo forests, you can also visit the Bamboo Culture Museum and Movie set base, or have a nice meal in the locals. 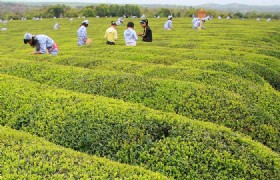