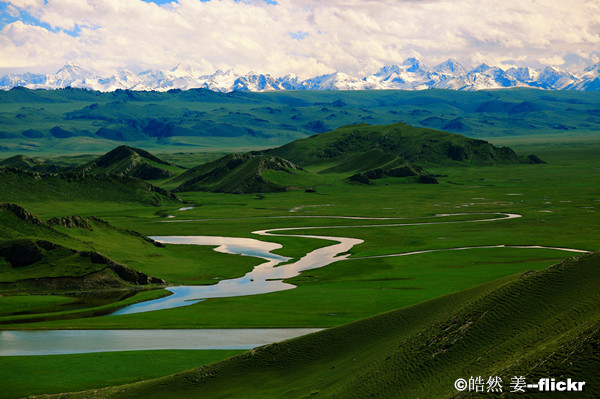 Bayanbulak Grassland is surrounded by these snow-capped mountains, which is one of the important bases of livestock husbandry in the Xinjiang Uygur Autonomous Region, and the second largest high mountains pasture ranking second only to Eerduosi grassland.

The water supply is primarily about the melting water of snow and ice as well as the rainfall mixture. Part of the area had the supplement from ground water, which had formed enormous quantities of meadow and marsh and lakes. Bayanbulak Grassland is a Mongolian term for the abundant stream spring water, at an elevation of about 2500 meters above sea level, having an area of about 23000 square kilometers, which is the typical grasses meadow steppe and the lush green summer pasture at the southern foot of the Tianshan Mountains.

From east to west, Bayanbulak Grassland's 270 kilometers wide, and 136 kilometers long from north to south. Its surrounding mountains rise over 3000 meters above sea level. Bayanbulak Grassland is one of the tourist resorts in China with unique features. Particularly, the natural scenery and the rich ethnic folklore are of extremely high ornamental and tourist value.

The "Nadam Fair" that is a yearly festival is a traditional pageant with distinct Mongolian features. It is usually held when the grass and water are full and flocks and herds are stout and strong. The contests and activities like the horse race and archery with exciting and interesting visual effect that could make people can't tear them away.

The famous Swan Lake is situated in the grassland, which is in fact the large area of swamp formed by many small linked lakes. It's the first nature reserve for swans. It's blessed with abundant water and grass, wet and cool climate as well as beautiful natural scenery. The nation's biggest wild swans population inhabits the place.

Swan Lake is the breeding ground for gregarious birds and spending the summer. When smoke of the first fires seeped out through the white felt yurts of the Mongolian people in the distance in the morning, large and small swans begin to take a repose or prowl about over there. Some industrious swans expanded its wings out of the surface of the lake, fly over the horse's back, the sheep and the yurts, hovering over the distant valley.

When the sun is rising, the reflections of the snow-capped mountains are growing visibly bit by bit. The posture when the swans are asleep is special and clearly exceptional. Sometimes they sleep when they are standing. The late afternoon is the peak period of ravening after its prey.

At this point, the swans practice the exquisite and beautiful dancing ballet on the water, sometimes it stands on its head, the body nearly projecting far into the water. The graceful moves display the body with its long neck in the most elegant and charming manner possible.