One man’s food is another man’s poison, and one of the most eye-opening experiences of traveling is trying out the weird and bizarre foods of another culture. Prepare your senses for a wacky adventure and challenge your taste buds to Hong Kong’s bizarre foods, many of which can also be found in Southeast Asia. Just be mindful and remain respectful of the fact that whatever tastes downright awful for you may be a delicacy to another. 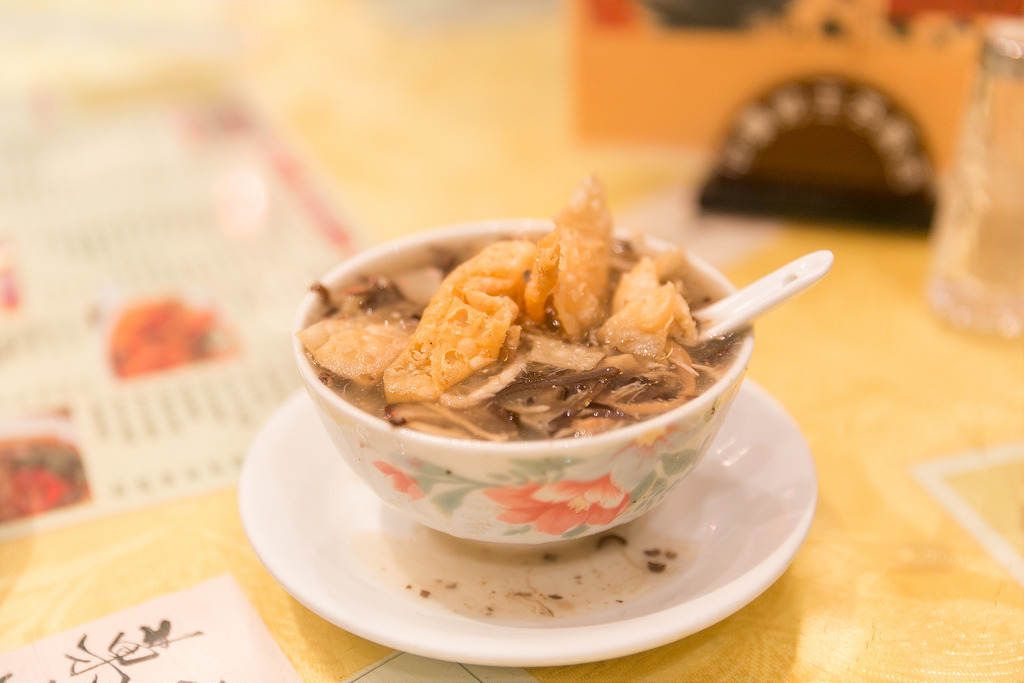 Consider this revenge for making Eve take a bite of the forbidden fruit. Snake soup is a medicinal winter warmer that’s drunk for its healing properties. It’s known to promote blood circulation, keeping the body healthy during the colder months and easing the symptoms of arthritis. Snake meat, bones, chicken, and condiments like ginger and herbs and spices are simmered for many hours, and different snake soup establishments have their own recipes. In addition to the soup, adventurous diners can also try dishes like fried snake meat and skin, or even the gallbladder.

Handling snakes take a lot of expertise and skill, especially when venomous snakes are involved. There are a few very established restaurants that specialize in serving snake soup and have generations of experience. Try Ser Wong Fun in Central or She Wong Lam in Sheung Wan.

How about a bizarre part of the most commonly eaten animal?  Chicken feet as a dish is easily found in Chinese restaurants that serve dim sum, and in fact, it’s regularly ordered if you eat out with locals.  Women are known to like it for the collagen.  The sight of chicken feet can freak you out, especially if you’ve only seen chicken in the forms of fillet, drumstick, and wings, and have somehow forgotten that they actually have feet.  If you can get over the wrinkly visuals, they are usually tasty, mostly due to the way it’s prepared in dim sum restaurants.

If you need more motivation to order chicken feet, think about the anti-aging collagen that you’re ingesting. 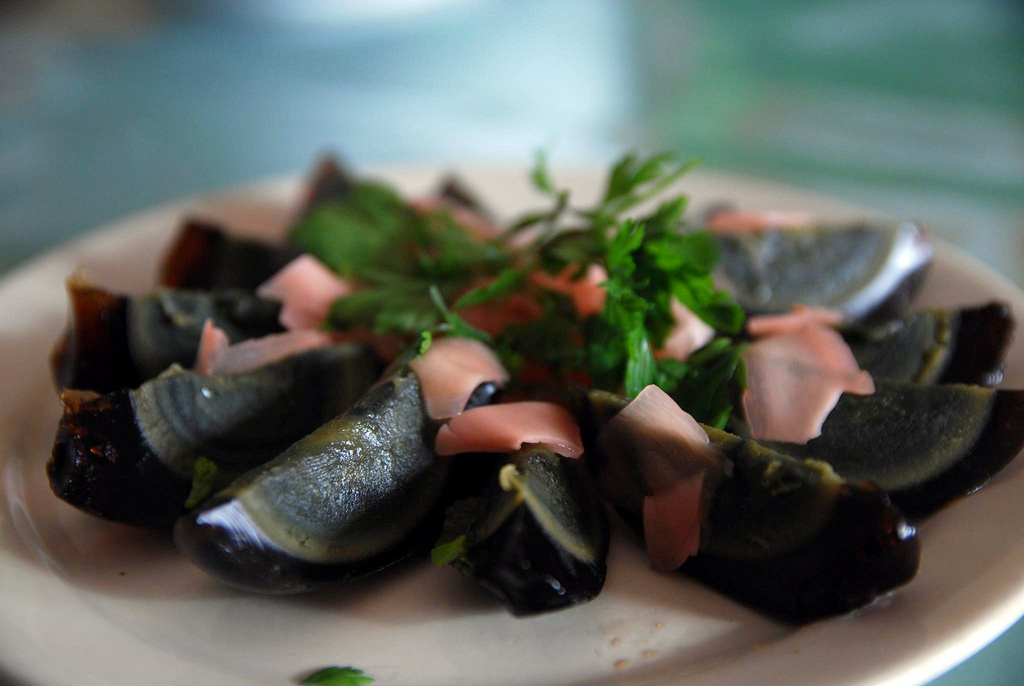 Century eggs are another common find in Hong Kong, and you’ll often find Century Egg Congee as one of the options in a local restaurant. The preservation of eggs has probably come up as a matter of necessity in the days before the almighty refrigerator. Contrary to what the name suggests, the eggs are not preserved for a century, though they may smell like it.  The eggs, instead of the yellowish and orangish hue, are blackish green in color. If you’re one who loves the taste of strong and mature cheeses, then century eggs wouldn’t be a challenge, most probably. Otherwise, it’s a bizarre food that’s benign enough, and even vegetarians can try. 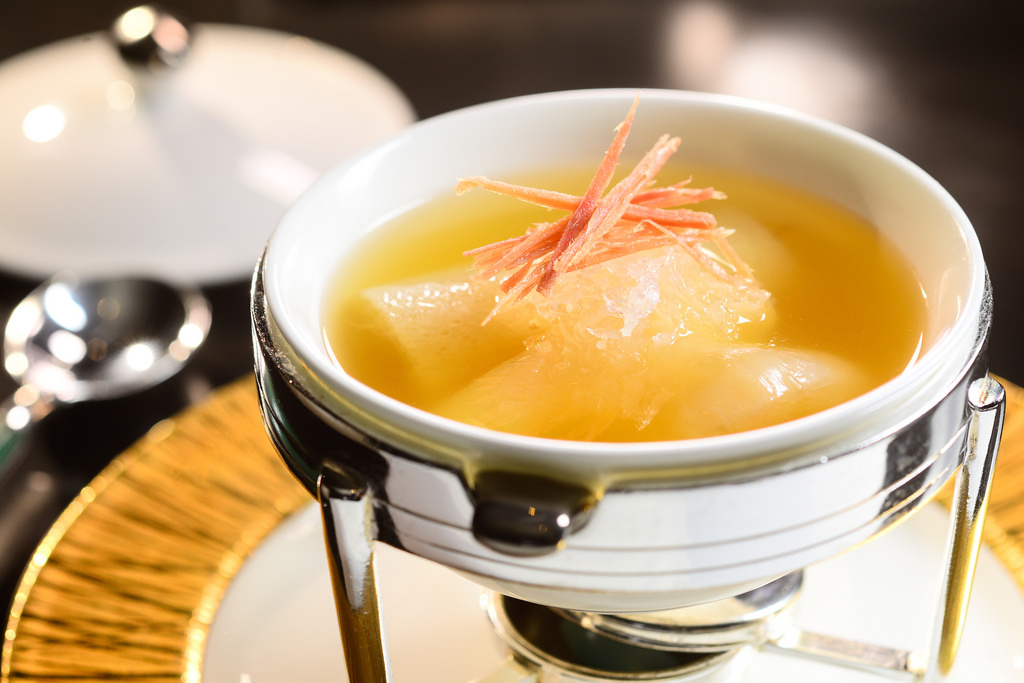 What could possibly be weirder than drinking the spit of a bird? Well, birds’ nest soup is a well-loved delicacy, and women especially love the soup for its skin enhancing properties. Birds’ Nest Soup is actually a broth made of a swiftlet’s saliva. In many caves and birds’ nest farms, swiftlets make their nests from saliva, and it’s thought to contain a high amount of amino acids and also epidermal growth factor, which helps in skin and tissue repair. Quality birds’ nest is very expensive, and the broth is actually mildly sweet and pleasant tasting so you may find it on the dessert menu of some higher-end restaurants.

Just when you thought that you were all gutsy for being able to consume animal innards. Drinking the blood of, or in this case, eating it, is quite something else. To be fair, pig blood is also consumed in Britain. Ever heard of black pudding? The blood curd has a consistency that is similar to tofu and is usually congealed with added salt and found in congee. The blood curd is thought to be packed with nutrients, and no it doesn’t taste like chicken, it actually does taste like blood. 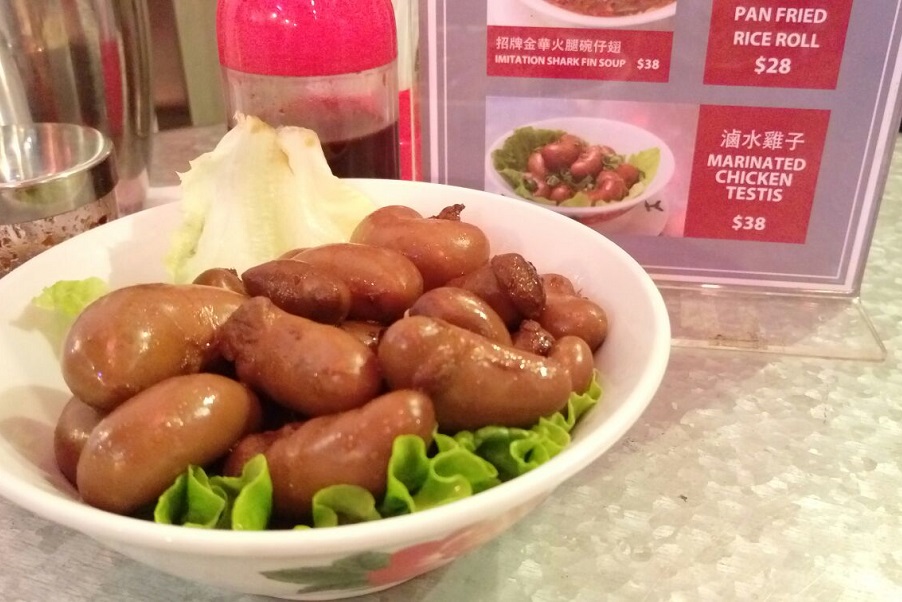 You knew this was coming, didn’t you?  Eating chicken testicles and bull testicles may be a symbolic way of having some balls, although in some Catch-22 fashion you do need a lot of balls to be munch them down in the first place. Served either boiled or fried or in broth, chicken testicles can be found quite commonly. As for bull testicles, you can head down to Crafty Cow in Sheung Wan, a gastropub that serves it with a dish name "Rocky Mountain Oysters."