Climbing the Great Wall of China

There is a saying goes: He who never climbs the Great Wall is not a real man. The Great Wall, one of the greatest wonders of the world, was listed as a World Heritage by UNESCO in 1987. Just like a gigantic dragon, the Great Wall winds up and down across deserts, grasslands, mountains and plateaus, stretching approximately 8,851.8 kilometers (5,500 miles) from east to west of China. With a history of more than 2000 years, some of the sections are now in ruins or have disappeared. 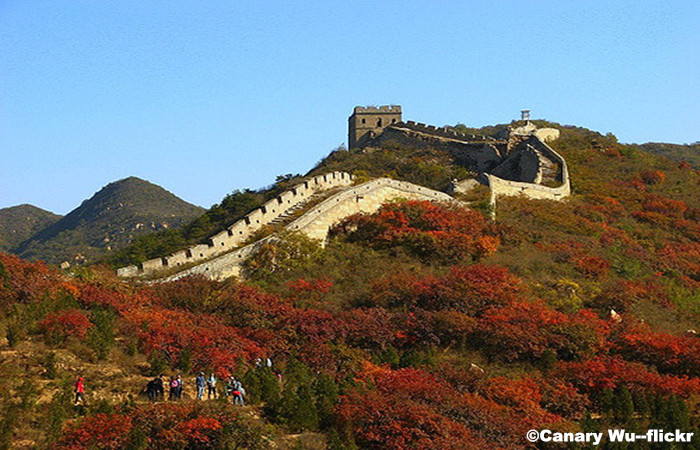 However, it is still one of the most appealing attractions all around the world owing to its architectural grandeur and historical significance.

The main Great Wall line stretches from Shanhaiguan in the east, to Lop Lake in the west, along an arc that roughly delineates the southern edge of Inner Mongolia. Its historic and strategic importance is matched only by its architectural significance. A comprehensive archaeological survey, using advanced technologies, has concluded that the Ming walls measure 8,850 km (5,500 mi). This is made up of 6,259 km (3,889 mi) sections of actual wall, 359 km (223 mi) of trenches and 2,232 km (1,387 mi) of natural defensive barriers such as hills and rivers. Another archaeological survey found that the entire wall with all of its branches measure out to be 21,196 km (13,171 mi). 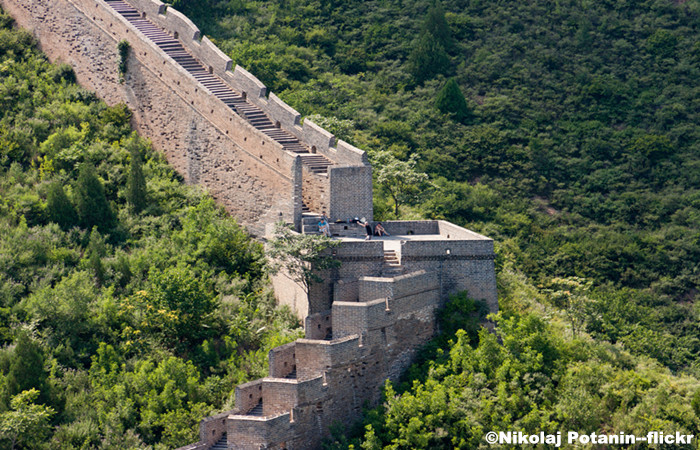 Wangjinglou is one of Jinshanling's 67 watchtowers, 980 meters (3,220 ft) above sea level. Southeast of Jinshanling, is the Mutianyu Great Wall which winds along lofty, cragged mountains from the southeast to the northwest for approximately 2.25 kilometers (about 1.3 miles). It is connected with Juyongguan Pass to the west and Gubeikou to the east. This section was one of the first to be renovated following the turmoil of the Cultural Revolution.

15 km northeast from Shanhaiguan, is Jiumenkou, which is the only portion of the wall that was built as a bridge.

Great Wall carries a considerable part of Chinese culture. It has long been incorporated into Chinese mythology and symbolism. The most well-known legend is about the collapse of a section of the Wall caused by Meng Jiangnu, who cried bitterly over the death of her husband after he died while building the wall. This legend has been spread widely through textbooks, folk songs and traditional operas.

One of the earliest known references to this myth appears in a letter written in 1754 by the English antiquary William Stukeley. Stukeley wrote that, "This mighty wall of four score miles in length (Hadrian's Wall) is only exceeded by the Chinese Wall, which makes a considerable figure upon the terrestrial globe, and may be discerned at the Moon."