Fengjing Ancient Town is a water town dating back to the time of the Yuan Dynasty. Situated in the southwest of Shanghai, Fengjing Ancient Town is 57 kilometers (about 35 miles) from Shanghai City. It has long been known as a typical ancient water town, as well as one of the four most famous towns in the south China. Others which enjoy similar reputations are Nanxun Ancient Town, Wangjiangjing in Zhejiang Province, and Shengze in Jiangsu Province. It is also known as “Town of Lotus” for the town is surrounded with thick trees and buildings with gurgling water and elegant lotus here and there. 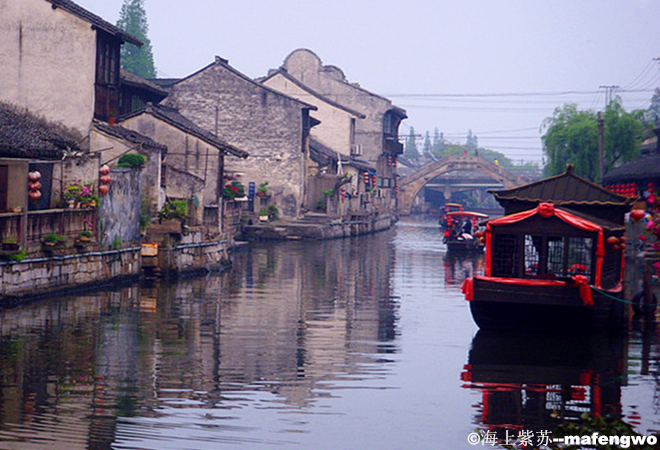 Covering an area of 48750 square meters, most buildings in the ancient town area are of a distinct Ming-Dynasty or Qing-Dynasty style, which features white-washed walls and black-tile-covered roofs, and are mainly two-storey structures of brick and wood. Most of the buildings hang the Chinese Lanterns highly. The combination of red, grey and white emits quiet and harmonious.

Network of water way covers the whole ancient town, and it is known for its ancient stone bridges, including the well known Three Bridges. There are 52 bridges, with the oldest one: Zhihe Bridge, having a history of more than 700 years. Zhihe Bridge is simple and solid with lichen growing in its stone seams. Both of its ends are stone stairs and piers. Over the bridge, you will a get a bird’s eye view of thick plants, ancient houses and ports on both banks with Rainbow Bridge before and stone bridge behind. 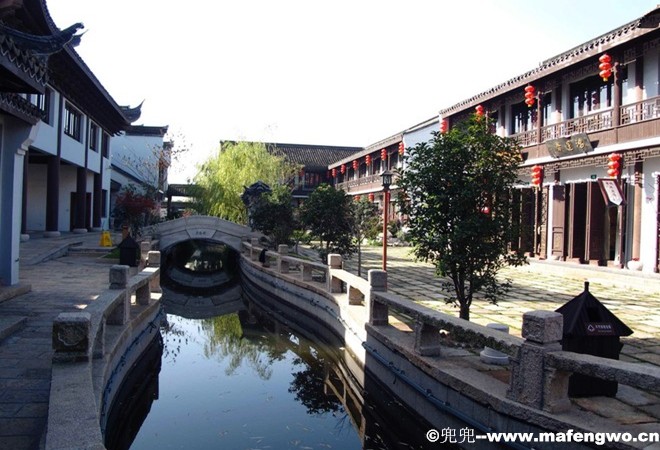 Every morning, it is noisy along the grey brick and stone paved streets as well as a series of stone bridges. The tea shops are open to business with tea aroma drifting about; fishers row by buildings and stone piers to reach the covered corridors bythe river to form a fish market. All these are well reflected in the folk song “fresh-water snails are tasty in January, clams are delicious in February, turtle is the most sturdy in March…”

Fengjing Town is also known as the cradle of famous Jinshan farmer’s paintings. Jinshan Peasants' Painting originated and flourished in Fengjing Ancient Town. With a unique art style, it has had great influence at home and abroad. And it favors Fengjing the "Home of Chinese Folk Painting". Its natural boorish attracts people’s eyes and have been sold across the world. Over 30 farmer painters have won prizes in art exhibitions both at home and abroad. In addition, there are many other folk crafts, which are of long standing, such as Blue allover, furniture-carving, kitchen mural, festival lanterns, paper-cuts and embroidery.

Attracting great numbers of domestic and foreign visitors, Fengjing Ancient Town is worth a visit to find the old culture and customs of China. Strolling on these thoroughfares, visitors can view local people's way of life if they pay heed, even in the tea shops. Visitors also can listen to local operas when there is a performance.