Romantic white snow, delicate Christmas trees and funny recreational activities on ice are always considered as the representations of Christmas. Though you are not in the western countries now, we can still take you to two places in Harbin to feel exotic Christmas feelings. Let’s go, dear!

Located in the northeastern part of China, Harbin is renowned as the “Eastern Moscow”, where visitors can enjoy a unique Russian-style Christmas. Harbin gains this lovely nickname from its geography, because it is quite near to Russia. If you have not decided where to go first in Harbin, we suggest you to start from the Central Street.

Enthralling Central Street in Harbin has a history of more than one hundred year. Firstly built in 1898, Central Street was just a traditional Street used by railway supplies. Not until 1924, it was designed into a gorgeous street by a Russian engineer and the floor is filled with special square stones. With a length of about 1450 meters, Central Street features amazing European-style architectures and foreign products. It seems that everything in the street tells visitors the history of Renaissance, the Baroque Period and Eclecticism. For example, the Education Bookstore with brilliant Baroque architecture style is the most important mark in Central Street. The architecture is preserved quite well by local people, which reflects the significant European cultural development in the past 300 years. Furthermore, there are still other appealing exotic buildings in the street. As the longest pedestrian streets in Asia, a variety of products are on sale here, such as British woolen cloth, French perfume, Russian leather and so forth. Wandering in such an attractive street, visitors usually feel like taking a tour to foreign countries. 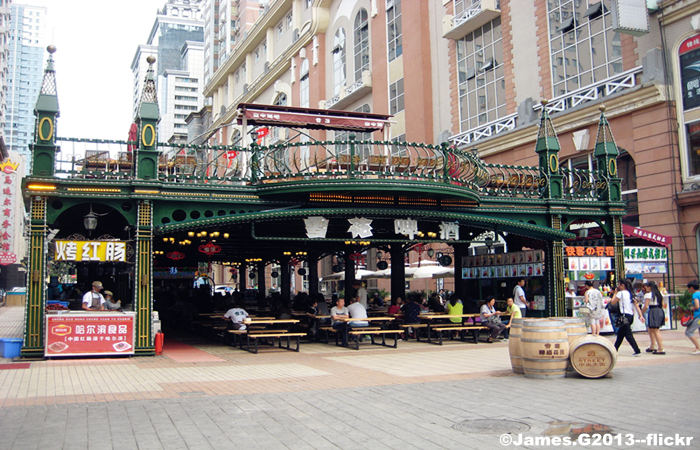 After visiting the Central Street, we are now heading for the St. Sophia Church. As we all know, praying in Church on Christmas Day is a custom in Western countries. Covering an area of about 721 square meters, St. Sophia Church is recognized as the largest Eastern Orthodox Church in Far East. It was firstly constructed by Russian people in 1907 and the main material was timber. Later Russian people repaired it several times with firm masonry and timber. Now it is admired as a masterpiece in Harbin. St. Sophia Church boasts for the special Byzantine style, which can be divided into 4 floors. And at the entrance, there stands the bell tower with 7 bells. Each of them has their own size and tone. It is said on religious festival in the past, such as Christmas, an excellent ringer would be invited to play musical progressions here. Of course, the Church was bustled with pious prayers. However, St. Sophia Church is no longer used as a Church now. Instead, it is developed into a remarkable gallery named “Harbin Art Gallery” and becomes the grand landmark. 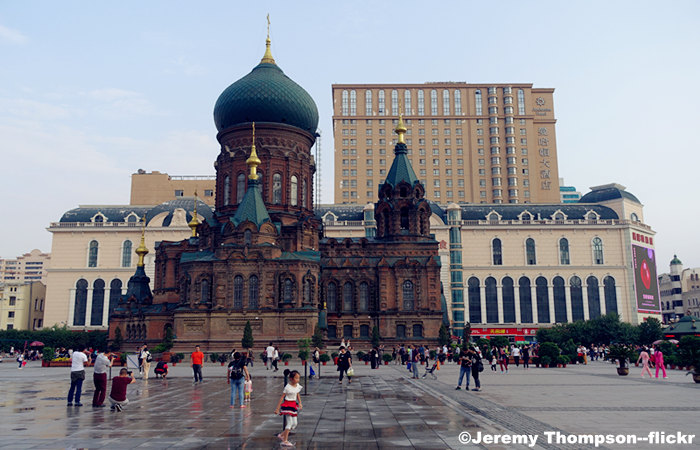 Travel tips: Photographing is allowed in the Church, but photographers should buy a special ticket in advance. The normal admission ticket may charge you 20 Yuan. 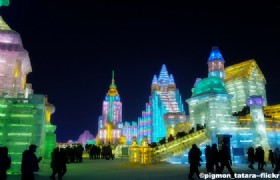