If Hong Kong is synonymous with any two peoples, it’s the native Chinese and the British who ruled it as a crown colony from 1841 until 1997. The British imprint is everywhere, from the English language to pubs, from the architecture of government house to the financial and legal systems that still distinguish Hong Kong from Mainland China under the "one country two systems" policy. 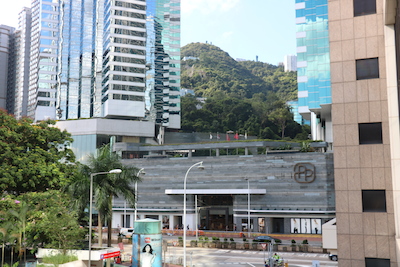 Indeed, post-1997, Brits remain the dominant expat community, employed in every arena from the police service to banking to tourism. Many can even lay claim to having been born in the territory. Which is why Hong Kong’s expansive French community can appear both impressive and a tad bewildering.

The French don’t have much of colonial history in the neighborhood save Zhanjiang – a prefecture-level city at the southeast tip of Guangdong facing Hainan Island, which Paris administered from 1898 to 1946. And let’s face it; the Brits and French are seldom the most comfortable of bedmates. But a struggling economy at home has sent many a Frenchman worth his baguettes overseas in search of employment and “Asia’s World City” has proven more than accommodating to les Francais.

There are now 25,000 French citizens in Hong Kong making it the largest French community in East Asia. And as one might expect from Gastronomic Gaulles, plenty of restaurants and bars have opened up in their wake, hawking fine wines and soft cheeses as only the French know how. This has proved a hit with the food crazy Cantonese as it has with Brits looking for something beyond their pie, chips and a pint. 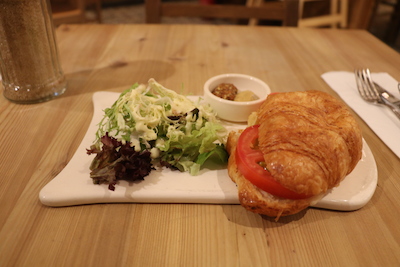 So if you’re swinging through the SAR anytime soon, be sure to check out one of the following bistros and bars:

Over on Wan Chai Johnson Road in Wan Chai is Passion by Gerard Dubois, a Swiss-French bakery par excellence. The décor is said to imitate a country cottage, and there’s a huge range of authentic bread and pastries to choose from as well as coffees and their fantastic signature hot chocolate, “Chocolat Chaud Passion.” Additionally, there’s a dining menu of similar pedigree with such delights as Coq au Vin and Slow Roasted Duck Leg. Check out their website for all shop locations and more info. 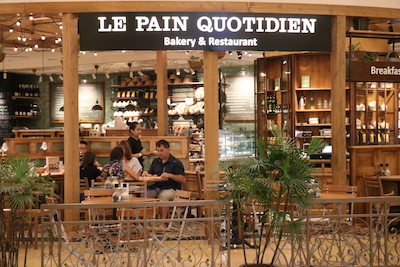 If you’re thirsting for the taste of France, head to Pacific Place near Admiralty where you’ll find some fine foods to dine out on. For breakfast, Le Pain Quotidien offers quite literally your “daily bread.” Founded by Alain Gourmont, this bakery-café uses organic ingredients with the assertion that “Good Food is Preventative Medicine.” And good it is, the tomato and cheese croissant proving a star selection. The rustic wooden interior detracts from the shopping mall setting while the real Belgium hot chocolate is as delicious as it sounds. 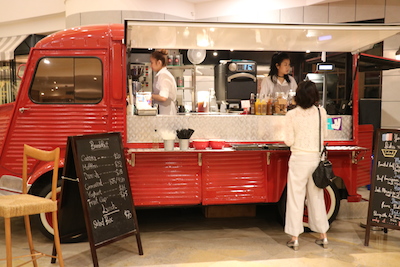 Just next-door Le Plat de Jour boldly proclaims to be “your French bistro” that serves “authentic food”. And what, pray, might you expect from such bold claims: Well, all the classics, escargot, steak tatare, pan-steamed foi gras, and moules mariniere. But if that sounds a bit too much for your weekday lunch, fear not, the good people at Le Plat de Jour have parked a classic citroen bus just outside converted into a deli hawking French delicacies as well as coffee and cakes to go.

Our final Pacific Place recommendation is more of a chic French-style drop-in for the office crowd than a sit resto. Nonetheless, if you need to send an email over a good coffee and pastry, this well-located café boasts a sizable terrace for Hong Kong not to mention reasonable prices for the area. Of a long list of delights, we recommend you sample the tomato and olive bread; it’s to die for.

This hole-in-the-wall bistro and wine bar on Wyndam Street in Central feels more like a transportation pod delivering customers to rural France a century or so ago. Authenticity – Pastis has it by the bucket load. But more importantly, it also has wine, though not to be consumed via a bucket. Beginning at HKD298 for a bottle of red from the Loire Valley, that’s really not bad. There’s also a fantastic a la carte menu.