The A-Ma Temple is one of the best-known places of great interest in Macau, one of the oldest temples in Macau. Situated in the southeast of the Macau Peninsula, The A-Ma Temple that is vulgarly referred to as the Tin Hau Temple dates back to the year of 1488 in the Ming Dynasty. People are saying that the A-Ma Temple was built in memory of Mazu as the Queen of Heaven and Protector of seafarers. 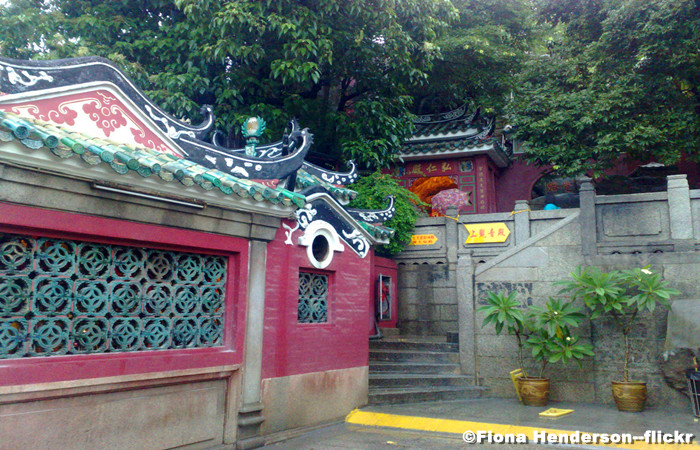 The A-Ma Temple standing against a verdant hill and facing the sea is the building along the cliff; ancient trees in this temple with its natural beauty could reach into the skies. The A-Ma Temple could be a tourist area affording a view of the silent and spectacular scenes. The temple is composed of six main parts, all of them in the style of its ancient buildings with a Chinese cultural flavor.

The stone steps could communicate with the winding path among the distinctive buildings. There're the old luxuriant trees on all four sides, complicated flowering tree and shrub, and crisscrossed rocks. All of them could happily combine the quiet and elegant garden with the grand and stately ancient temple, which could be more elegant with classic simplicity with its majestic and precipitous appeal as well as the rich national characteristics.

Two fierce-looking stone lions before the front gate of the A-Ma Temple stand there, neatly carved and vivid shapes. The legend says that they're the masterpiece made by the people in the Qing Dynasty three hundred years ago. There're complex flowering tree and shrub, and crisscrossed rocks inside the temple. The rock on both sides of the winding path had the cliffside inscriptions inscribed by eminent socialites and high-ranking government officials as well as artists and writers alike through the ages.

Once inside the temple and going through a gateway, you would arrive at the Hongren Hall by a bowery maze. A statue of Mazu is worshipped here, and according to thinking the hall had the longest history in existence in the building. Go straight ahead and the Hall of the Guanyin Bodhisatta came into view, which was built primarily using bricks and stone in a simple and bold style.

Visitors have come the A-Ma Temple to pay homage to the Goddess of the Sea, and made the temple a busy gathering place of devout men and women. The pilgrims from near and far concentrated there and burned incense and prayed for blessings. The local people even held colorful programs for people's entertainment. At this point, there's the purple smoke pervading the A-Ma Temple.

Mazu is the Oceanic Protection Manito of China and has been canonized since ancient times when the unique Mazu Culture of China came into being. The A-Ma Temple is not only a graceful architectural complex of the ancient temple, but also boasts the extensive and profound Chinese traditional culture as the rich and valuable historical heritage. Mazu culture is becoming a deeply planted international cultural phenomenon.