The dizzying ascent of China’s economy over the past thirty years has been actualized in the country’s skyscraper craze. According to the US-based Council of Tall Buildings and Urban Habitat, the Middle Kingdom has topped the charts for the last ten years. Staggeringly 2016 saw a new record, the completion of 84 buildings that are taller than 200 meters – the height that defines a skyscraper. Of Chinese cities, Shenzhen leads the pack having completed 11 skyscrapers in 2016, a number that exceeds the total number of skyscrapers constructed in the USA and Australia combined. 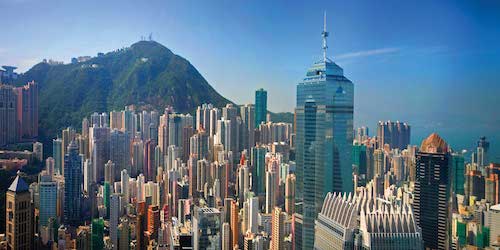 Located next to the Coco Park shopping mall in Futian district, the tallest of these structures in Shenzhen (and indeed China) is the Ping’an Finance Centre, a mega-tall structure at 660 meters comprising 115 stories. During it’s construction in 2015 two daredevil Russians illicitly climbed this metallic monster. To get a sense of what an engineering feat this tower is, as well as an aerial view of the skyscraper forest Shenzhen has become, it is worth watching the video clip on YouTube.

While Mainland cities have been grabbing the headlines of late, one should not neglect Hong Kong, the original and still the most visually arresting high-rise city. When one awaits for the Star Ferry at TST in Kowloon, the view of Hong Kong Island is what adorns all the postcards: A veritable wall of glass, metal, and neon clinging to a mountainous green island, surrounded by warm blue sea.

Hong Kong has 1,303 buildings over 100 metres in height and 316 buildings over 150 meters. Indeed, the facades of the Bank of China Building, Manulife Plaza or the HSBC Main Building will be familiar to anyone who’s ever gazed at Asia’s Manhattan and marveled at this vertical cityscape. 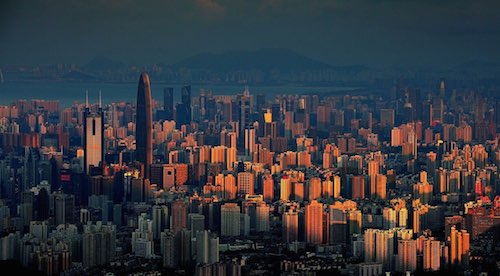 On its completion in 2011, this was Shenzhen’s tallest building, until Ping’an surpassed it. Also known as the Kingkey Finance Tower, this 100-storey goliath in Luohu district is well worth a visit. At its base is the KK Mall, home to vendors of various global brands, as well as an international supermarket and Imax cinemas. Much of the tower block comprises office space, but at its summit, you’ll find the St. Regis Hotel. That’s right, you can dine on Italian fare, sip on afternoon tea or even go for a swim at close to 450 meters above sea level. The views of Shenzhen and the New Territories are staggering. Additionally, the building illuminates at night with advertising blurb. One romantic even asked his sweetheart to marry him via the building – now that can’t have been cheap!

The ICC is the world’s tenth tallest building and Hong Kong’s tallest. Remarkably it is not on Hong Kong Island but stationed opposite in western Kowloon, facing down the IFC Tower 2, the territory’s second tallest building. Occupying the 102nd to the 108th floors is the Ritz-Carlton Hotel, which, regardless to say, affords some staggering views of Victoria Harbour as well as the amenities one might associate with  5-star hotel. Indeed, the bar and pool on the 108th floor are the highest in the world. 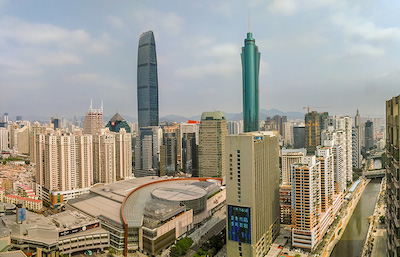 Once Shenzhen’s tallest and most iconic structure, Diwang (also known as Shun Hing) has slipped into fourth place. However, it retains the title as China’s tallest all-steel structure. It’s also arguably Shenzhen’s coolest looking building, something akin to a dormant auto bot. Plus it’s a piece of history, completed in 1996 during the South’s original economic boom period. On the top floor, you’ll find the Meridian View Centre, which has a great observation deck from where to view old downtown including the Dongmen and Lizhi Park.

Ascending from the elephantine IFC mall, packed with such commercial treats as the Apple Store or the Inagiku Grande Japanese Restaurant, this is Hong Kong Island’s tallest tower and the SAR’s second at 412 meters above sea level. It is part of the mighty IFC complex, which includes the 50-storey Four Seasons Hotel. So after a long day navigating the racks of fancy attire at shops like Zara, why not retire, for some luxury food and some quality lodgings, Hong Kong-style?