Hong Kong Island and Kowloon just opposite are home to the vast tower blocks that are at the heart of global finance and commerce in East Asia. But on both sides of the harbor, there are enclaves where tradition is maintained, and gods are revered. Look down the backstreets, saunter through the parks, and you’ll find Buddhism, Taoism, Confucianism and localized faiths alive and well and probably burning incense. Indeed, should you arrive in springtime during Tomb Sweeping Festival, or summer during the Hungry Ghost Festival, you’ll witness all manner of offerings go up in smoke, as well as associated operas, community gatherings, and banquets. 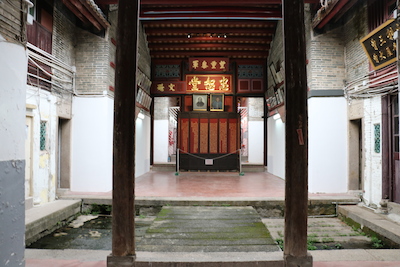 So if you tire of the malls and high-rise towers, look a little further in Hong Kong for the ancient trappings of Chinese culture that still linger here. For there’s a spiritual side to the SAR. You just have to go in search of it 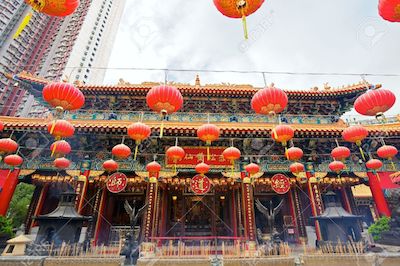 On the Kowloon-side Wong Tai Sin is often said to be Hong Kong’s most popular temple and a great place to get your fortune told. They claim to “make every wish come true upon request” hence the popularity. The temple building is also a source of Wong Tai Yin’s acclaim with an architectural structure that comprises the five-geomantic elements – very feng shui. Taoism, Buddhism, and Confucianism are all revered here though the original purpose of the temple that was to commemorate the famous fourth-century monk Wong Tai Sin who became a deity at Red Pine Hill. In 1915, a Taoist abbot named Liang Ren-an carried a sacred portrait of Wong Tai Sin from Guangdong Province to Hong Kong and this precious portrait is now housed inside the Wong Tai Sin Temple where worshippers pray for good fortune by making offerings.
Man Mo Templ

Literature and War may seem two converse enterprises but in Hong Kong they’re venerated at the same temple. Located right in the middle of town on Hollywood Road Man Mo Temple is dedicated to the god of literature “Man” holding an ink brush, and the god of war “Mo” wielding a sword. The combination of war and words is, to the Chinese, symbolic of law and order and this temple, built in 1847 during the Qing dynasty by Mainland merchants, doubled as a court of arbitration for disputes between locals as well as the Chinese and the European colonialists. 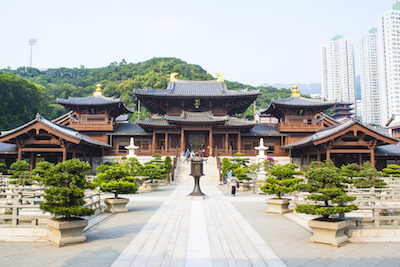 Located on Diamond Hill is the middle of Hong Kong Island, this is a serene sanctuary from the hustle and bustle of everyday life. It was originally founded in 1934 as a retreat for Buddhist nuns but was rebuilt in the 1990s following the traditional style of the Tang Dynasty based on drawings from the famous Mogao Caves in Dunhuang, Gansu Province. It is constructed entirely with cypress wood, without the use of any nails and is currently the largest hand-made wooden building in the wood. The temple halls have statues of Sakyamuni, Guanyin, and various bodhisattvas.

Should you wish to head north towards the Shenzhen border and the less congested areas of the New Territories, you’ll find some fine sanctuaries of worship around Sha Tin. Che Kung Temple, located in the Tai Wai area honors Che Kung, a military commander of the Song dynasty, a giant statue of whom can be found at the altar in the main worship hall. The original temple was built around 300 years ago though structure you see today was erected in 1993 to accommodate the increasing number of worshippers during Che Kung’s festival, which happens on the second day of the Chinese New Year.

Another worthwhile place to say your prayers is the Monastery of the Ten-Thousand Buddhas located in Pai Tau Village also located in Sha Tin. A hillside pathway lined by Buddha's fronts this grade-three historic building – there are in fact 13,000 Buddhas in the monastery in total, though no monks, making the name a tad misleading. However, the bright red architecture, golden effigies, and stunning natural scenery make the temple complex, which covers an impressive eight hectares, worthy of a pilgrimage, particularly if you’re a film buff as the temple has featured in several TV series and films including the opening scenes of the much-lauded crime thriller Internal Affairs.