Xidi is a very beautiful village located the southern foot of Huangshan, only 40 kilometers away from Huangshan Scenic Area in Anhui Province. It is the perfect place for visitors to see typical folk houses, where residents have lived as they have for centuries. It gives visitors the rare opportunity to explore China's ancient culture and arts. 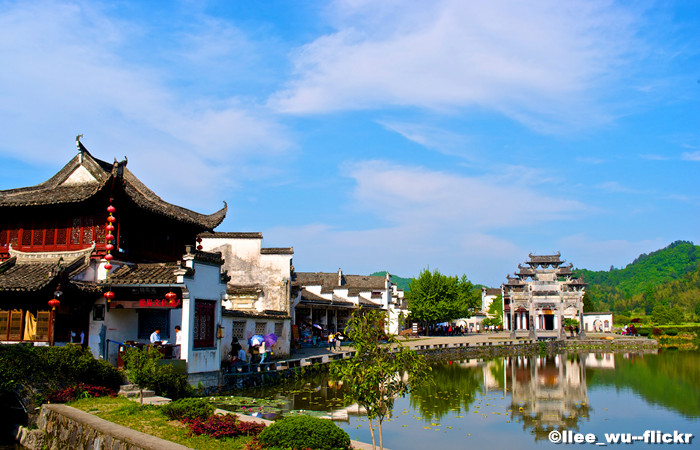 With a history of over 900 years, Xidi Village is segmented by over 40 ancient winding and narrow lanes which are paved with bluestones. Visitors strolling through this ancient village will discover traditional Hui-style houses, ancestral temples, academies of classical learning, stone archways, white walls and grey tiles, beautifully paned windows, projecting horse-head walls, and stone slab bridge. These features are all centuries old and the residents live as they always have making Xidi Village an open-air museum.

On the marble doorframes, flowers, birds and beasts can be found carved on them. The carved bricks feature: pavilions, human figures, and scenes from local operas. Many villagers have kept many of these arts alive, and visitors can visit them and see their woodcarvings, murals, and gardens exhibition by the local villagers. In Xidi Village, the arrangements of the antique furniture, and the lay of the paintings in the houses are as they were during the Ming and Qing Dynasties.

Xidi Village appears like a page in a fairy tale. Embraced by mountains, with clear streams flowing through it and goldfish ponds scattered throughout it, and with paddy fields placed in front of it, Xidi Village looks to picturesque to be real. In 2000, this very quiet and peaceful village was listed on UNESCO's World Cultural Heritage List with Hongcun Village, and ever since, architects, planners, sculptors, industrial artists, and painters have been heading to Xidi as it provides them with abundant sources of inspiration.


Xidi Village was originally called Xichuan (West River), owing to the various water courses flowing through it. It is said that Xidi was the traffic hub, and the government set up a courier station for the officials to take a short break. While in ancient times, the courier station was known as the “delivery shop” (Dipu in Chinese), so Xichuan was also known as “Xidi”. In fact, The rise of the village was closely tied to the fortunes of the Hu family. By 1465 CE, during the Ming Dynasty, family members had started in business as merchants, leading to construction of major private buildings and a public infrastructure. By the middle of the 17th century, the influence wielded by members of the Hu family expanded from commerce into politics. The prosperity of Xidi peaked in the 18th and 19th centuries, at which time the village comprised about 600 residences.

We have Mount Huangshan Tours every week. In January and February, tours are available every Monday except Chinese New Year Holiday Period.   We also have good price hotel rate in Huangshan area at the best money value deal.