Finding the Jardim de Lou Lim Loc was by accident. I was checking the map of Macau randomly the other day, then I was attracted by its name. It sounds like a nice place for a leisure walk or hanging out with friends. Standing outside the gate, for a moment I almost thought I found the wrong place. It looked so small, like some beautifully designed front gate from some wealthy family. Later I came to realize that the garden belonged to the famous Lau Kau Mansion. 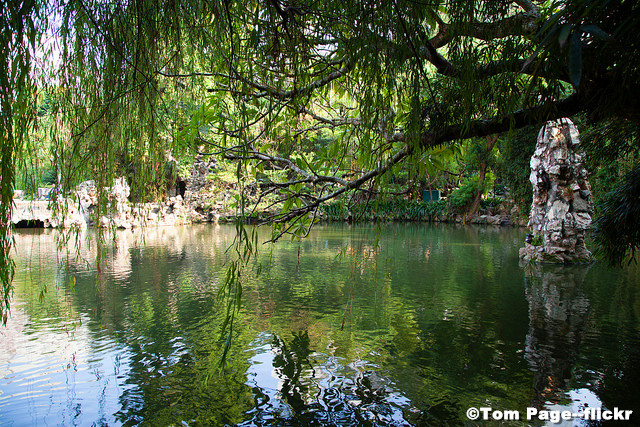 Jardim de Lou Lim Ioc is located in the middle area of Macau Peninsula, covering an area of 1.78 square kilometers. It is also the only garden with the style of Classical Gardens of Suzhou. There is a building with baroque style inside the park, painted with typical European decorating color-light green. Firstly built in the year of 1924, now it has became the teaching building of some junior school. As a matter of fact, it wasn’t a public garden at the first place.Speaking of its origin, there is one person we can’t miss out, the owner of the garden, a gentleman called Lo Lim Ioc.

He firstly built the park as his personal garden.Lou Lim Ioc was one of the richest people in Macau. In 1925, he built the park which was called “Leisure Garden” at that time. After Lou died, the business of his family deterioted. In 1973, the government of Macau decided to rebuild the garden and made it into a public park.

The moment you step inside the garden, it feels like you are walking into a secret garden that is faraway from the chaos. Looking inside from the front gate, there is a huge arch gate with some calligraphy characters on it. Lovely road with flowers and bamboos sitting besides the arch gate, small pond with fish swimming around, artificial hills with various shapes, everything is carefully designed. It must be awesome to have such a great garden on one’s own.

The amazing scenery makes the whole place look so peaceful and quiet. No wonder this is a popular place for local people. If you have kids, the pond could be a perfect place to have fun. Many kids were standing besides the pond, throwing small crumbs and feeding the fish. Truth be told, it might not worth the effort to travel across the sea to see such a garden, but for local citizen, it’s great to have such a hide-away place in the city.

They say there is a special flower in the pond that only blooms in July every year. Such a pity I didn’t come here at the right time or I could see those pretty blossoms. Walking aimlessly in the park is the best. It’s like this place has some kind magic power to calm down people’s mind, bringing peace to the heart. Need some place to do some meditation? This is the best place.