Many people learn the name “Emei” in fictions. It’s usually recorded as the base of Emei School - a school which consists of female. Actually, apart from those fiction elements, Mount Emei is a good place to visit. Looking its winding and beautiful figure, you will find that it resembles very much an eyebrow of a girl. That’s how it derives its name.
Visitors to Mount Emei will likely see dozens of Tibetan Macaques before experiencing the graceful Buddha’s glory. Those animals can often be viewed taking food from tourists. Local merchants sell nuts for tourists to feed the monkeys. Some monkeys may be seen eating human food such as potato chips and even drinking soda from discarded bottles. The Emei Shan Liocichla, a passerine bird, as well as the Emei Music Frog, a vocal frog, are named after the site.
Beauitiful scenery there have drawn lots of people’s attention. On the mountain there are four scenic regions: Baoguo Temple, Wannian Temple, Qingyin Pavilion and Golden Summit. Its main peak, the Golden Summit, is 3079.3 meters (10,103 feet) above the sea level, seemingly reaching the sky. Standing on the top of it, you can enjoy the snowy mountains in the west and the vast plain in the east.
In addition in Golden Summit there are four spectacles: clouds sea, sunrise, Buddha rays and saint lamps. In 1996 Mt. Emei was enlisted in the world natural and cultural heritage by the UNESCO. Great spectacles of Mount Emei include the sunrise and Clouds Sea seen from the Golden Summit of the mountain. The sunrise is very varied, but optimally begins with the ground and sky being in the same dark purple, soon showing rosy clouds, followed by a bright purple arc and then a semicircle where the sun is coming up. The Clouds Sea includes several cloud phenomena, like clouds appearing in the sky above, in addition to the regular clouds beneath.
Mount Emei is also one of the Four Sacred Buddhist Mountains of China, and is traditionally regarded as the place of enlightenment, of the bodhisattva Samantabhadra. As early as 5,000 years ago, the Emperor Xuanyuan paid two visits here to learn Tao thoughts.
1,900 years ago, a practitioner built the first monastery here, thus marked the mountain the birthplace of Buddhism in Yangtze Valley. Today the Buddhist culture has become the main body of Emei Culture. The Buddhist architecture, music, grottos and paintings in the mountain all reflect rich religious flavor and culture. It is an area of exceptional cultural significance as it is the place where Buddhism first became established on Chinese territory and from where it spread widely through the East.
Further more, Mount Emei is also notable for its exceptionally diverse vegetation, ranging from subtropical to subalpine pine forests. Some of the trees there are more than 1,000 years old. Approximately 200 plant species in various plant families have been described from this mountain. 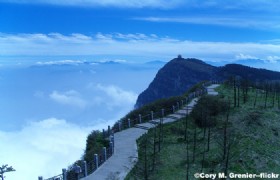 This tour of Chengdu will defintely capture the essence of the city. You have the opportun...