Mentioning Ningbo, lots of people may think of the well-known manufacturing. However, Ningbo snack is also notable. Ningbo-style pastry is one of the 12 famous types of pastry in China. These pastries are exquisite in selected materials, nutrition, processing and shape.

They are crunchy, tender and crisp. There are a dozen varieties, including cakes and pancakes. Among hundreds of species, make a list beforehand to taste as many as local snacks as possible.

You may see Crystal Leaf Fat Bun served at every restaurants. This steamed dessert is made of dough and filled with a mixture of leaf lard, nuts, melon seeds, and sugar. Dragon and Phoenix Golden Cake is another one of the top ten Ningbo local snacks, and particularly well-known in East Zhejiang. Golden in color and with pattern of a dragon and phoenix, the cake is made of polished glutinous rice, with fillings of processed beans, sugar, orange peel, osmanthus flowers, and so on. The history of the snack is dated to the South Song Dynasty (1127-1279). The famous Dragon and Phoenix Golden Cake enjoy more than just wonderful taste.

As legend goes, when the Jin invaders seized the capital of the South Song Linan (the present Hangzhou), Zhao Gou the emperor fled to Mingzhou (present Ningbo) and there a village girl saved his life and served him food including a cake. When Zhao Gou recaptured the capital, he repaid his savor by naming the cake he ate in his refugee "Dragon and Phoenix Golden Cake"and from then on the cake has become a snack that must served at weddings, symbolizing happiness of married life.

In Ningbo, as in all China, sweet dumpling is a symbol of family reunion and happiness and in Ningbo it is a local custom for all family members to have dumplings on the morning of the first day of the lunar year. Not all visitors to Ningbo have the luck in enjoying the Top Ten Ningbo Dishes. However, one thing that any visitor can not miss is the Ningbo stuffed lard and sesame dumpling, just like one who goes to Beijing must go to the Great Wall. Dumplings are very popular in the city; however, to enjoy the most delicious, Gang Ya Gou Sweetfood Beaufet will be a good destination.

Noodle of Three Delicacies is another featured snack in Ningbo. This delicious noodle soup is prepared with quality noodles with slices of chicken, port, and ham. Shortbread with Sweetened Bean Paste is made of dough filled with sweetened bean paste, golden in color, sweet and crisp. Small Steamed Bun with Pork Filling bun is prepared with wheat flour sheet and filled with pork stuff and seasonings. It is better served with vinegar.
Wonton is a very popular snack in China, but Ningbo Wonton is well-known for its long history and special local flavor.

Ningbo Wonton has two types: steamed Wonton and Wonton soup. In the past, it was common to see lots of Wonton peddlers, who carried on their shoulders a kitchenette and material for Wonton, hawking all the way in the streets. 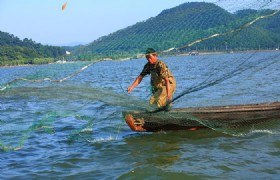 Have a short break from Shanghai urban hustle and bustle on this 2-day trekking tour to th...

Have a short break from Shanghai urban hustle and bustle on this 2-day trekking tour to th...