Mount Longhu, situated in 20 kilometers southwest of Yingtan City of Jiangxi Province, is one of the most famous birthplaces of Taoism in China.

Mount Longhu was called Yunjin Mountain at the first place. In the East Han Dynasty (25-220), the first Tian Shi (a title for Taosit priest) Zahng Daoling started to distill elixirs at the Yunjin Mountain. After the elixirs were made, there appeared a dragon and a tiger. This is the time when this mountain got its Dragon and Tiger Mountain.

When Taoism has its prime time, there are numerous Taoist palaces and temples were constructed at Mount Longhu. Among those temples, the most famous ones are the Shangqing Palace, Zhengyi Temple, Immortal City and Tianshi Mansion. Nowadays, there are many visitors from home and abroad come to visit Mount Longhu and these Taosim temples for the admiration of its long and profound Taoist culture.

The essence of the beauty of Mount Longhu lies in its Danxia landforms and river views. Those peaks and rocks formed by red glutenites are located in various shapes and vivid postures. Some resemble imposing lions, some like quiet thinkers, some are elephants that are drinking. To find more lively creatures from these rocks, you’ll have to expand your imagination. But more interesting rocks are the “Ten Shall Not” rocks in the Mount Longhu. These “Ten Shall Not” are rocks that are named by their vivid shapes and beautiful legends, like the Peach Stone and Mushroom Stone.

Among the Mount Longhu, there lies a river called Luxi River flowing through the mountain. Sourced from the mountainous area, the Luxi River like a winding belt lies among the mountain to collect the surrounded peculiar peaks, strange rocks, and dense forests into the picturesque scenery.

A drifting on the Luxi River to enjoy the beautiful landscapes along the river is the thing should not miss when travel to Mount Longhu. You will enjoy the spectacular sight of the cliff tomb groups in the cliff along the river. These cliff tombs are in different shapes and heights above the water. These are tombs of the ancient Guyue people in the Spring and Autumn Period (770-476 BC) and the Warring States Period (476-221BC), having a history of more than 2,600 years.

This site with great historical values is considered a wonder by people. You can still see the yellow confins and mud bricks that were used to fix the tomb. These tombs in the dangerous cliff face with large quantity and unique shapes are entitled with “the best natural archaeological museum of China”. But for the reason why they were located there and how the ancient people managed to do this is still a mystery to be explored.

Every day at 13:30 pm and 16:30pm, you will have the chances to see local people simulating performances of hanging coffins to the cliffs. 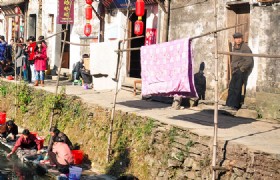