As the tour bus drives across the Macau Cross-sea Bridge, we come into the land of Dangzai Island. Macau is formed with three parts, Macau Peninsula, Dangzai Island and Luhuan Island. Comparing to the Macau peninsula, Dangzai island might seem a little bit narrow and crowded, but the highlight of it is something else, not by the size. Dangzai Island is way quiet than other two places. The famous Macau University is also located on the island. 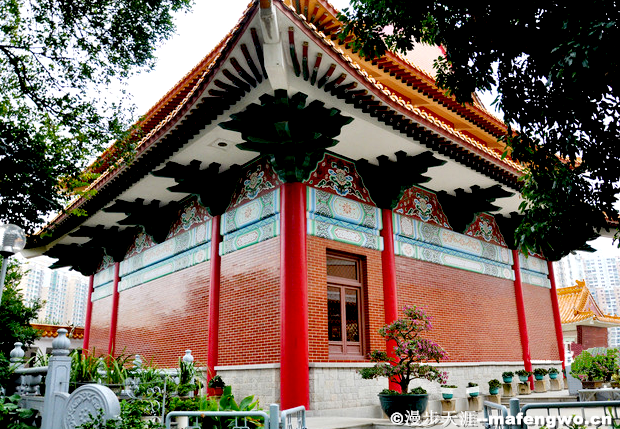 Pou Tai Un Garden is located on the No.5 of Road Lu Lianru of Macau, both a charity institute and Buddhism temple. In the year of 1928, a monk named Shi Zhiyuan moved from Hangzhou city in Chinese Mainland, to Macau, and built a temple called Hall of Wisdom Heart. Later it was renamed as the Pou Tai Un Garden in 1964. Situated in the downtown area and wrapped with a small patch of cottages, Pou Tai Un Garden seems so broad yet quiet. Flowers with full blossoms inside the yard, Monk Jianzhao stands in front of the garden, welcoming the tourists and worshipers from all directions.

Today there are still a lot buddism halls inside the garden such as Daxiong Treasure Hall, Six God Hall, All Shining Hall, Longhua Hall and others. Inside the Daxiong Treasure they have a huge statue of Sakyamuni that looks very solemn and serious. Another highlight of the garden is the statue of Six God, unlike other Buddhism statues, this one is made of gold.

Puming Hall was built about about a few years ago, also known as the Three Treasures Hall. It is located on the left front of the front gate. Stepping inside the hall, three wooden statue covered with golden paint are right in front of your eyes.The middle one is also Sakyamuni statue-the founder of Buddhism, with Amitabha(Buddha of the nirvana) on his left and Apothecary(Buddha of the longevity) on his right.

Taking a random walk inside the garden, there are statues all over the place. Stone-carved Avalokitesvara near the Daxiong Treasure Hall, some parts are wrecked already, only left with her arms. From the south corner of the garden, there used to be a statue of the North God, which was also the only god of Taoism. It was meant to protect the garden from snake attacks in the old days. In the year of 1997, the North God statue was given to the Macau Museum as a gift.

If you need a quiet and nice place to hang out, go to the small garden full of flowers. Not only the pretty flowers lure the tourists inside, the 4-faced Buddha is also something to look at. 4-faced god is considered as one of the most powerful Buddha, for he could make almost any of your wish come true. Love, career, health and money, each face represents a side. However, one thing should be keep in mind if you want to make a wish with 4-faced god. Never forget to come back and thank him when you wish becomes real.