Before the very first rays of sunlight set in, Tibetan monks carried huge thangka of Buddha, exquisite paintings on silk canvases to the hillside overlooking the Monastery. Upon hearing the chant of lamas, the call of bugles and drums, tens of thousands of Tibetan pilgrims, locals, and tourists flocked to the cermony site. In this sacred atmosphere, annual Sunbathing Buddha Festival started. 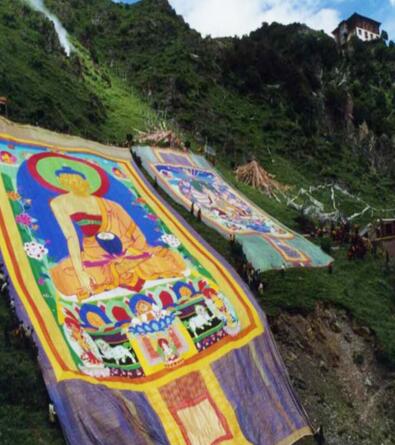 Spectators were gazing in awe as the thangka was unfurled to it full, 400 square maters. They laid  their khata- a traditional ceremonial scarf which symbolize purity and compassion - besides the thangka. By doing this, they show their faith and respect to the Buddha.

Through their chant, lamas delivered the worship to the heaven and pass on spectators' wishes to the Buddha. In the meantime, spectators would kneeled down while chanting scriptures, paying their homage to the Buddha. People with fulfilled wishes are also drawn to the ceremony to redemn their vow to the Buddha, often with sacrificial offering such as poultry. 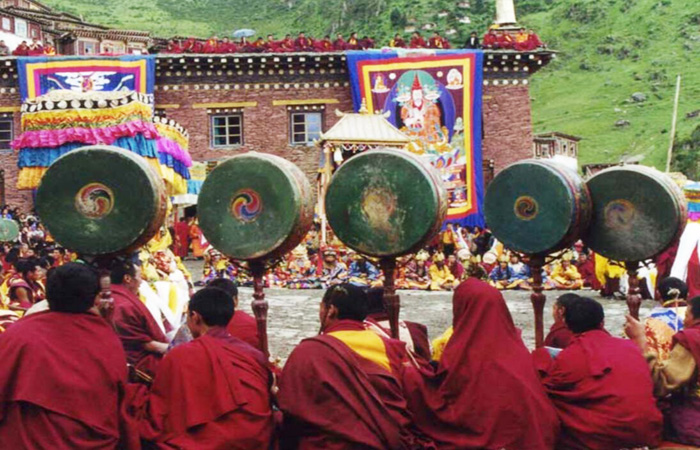 After several hours,the ceremony was given to an end. The thangka was rolled up and carried by the monks to circle the monastery three time before being restored to the monastery.

The Festival's Origin and Significance

Also known as "the basking of Buddha", this festival is held at the monastery in early January, or mid-April, or mid-June of Tibetan calendar, varied in different principals of Tibetan Buddhism. Wrapped in a history dating back to the middle of 18th century, this festival is now a strong magnet for pilgrims and tourists. Besides the image of a Buddha, a thangka can depit prestigious lamas, deities, or bodhisattvas, or complex mandala. It is an important aid for pilgrims to meditate and go extra further in their way for ultimate enlightement.

The Labrang Monastery is one of the six great monasteries of the Gelug (or Yellow Hat) school of Tibetan Buddhism and one of the largest outside of the Tibetan Autonomous Region.

one of the six principal monasteries of the Nyingma school of Tibetan Buddhism, located on a top of mountain in an atltitude of 4200 meters above sea level.

In 2017, Katok Sunbathing Buddha festival will be celebrated from July 31st to August 2nd.

The mother temple of Dalai lamas, one of the six great monasteries of the Gelug (or Yellow Hat) school of Tibetan Buddhism.

There are two monasteries in the unique town of Lhamo. The town stretches across Gansu and Sichuan province with the provincial border running through the center. Due to  years of power struggle between Kirti Monastery on the Sichuan side and Sertri Monastery on the Gansu side, the town houses twice Sunbathing Buddha festivals every year.