Mount Emei is one of the Four Sacred Buddhist Mountains of China, and a UNESCO World Heritage Site. Apart from the hometown of Buddhism, Mt. Emei is also a wondrous world. The trees are verdant almost all the year round; the waterfalls are splendid; the whole scenery is beautiful and quiet.

The name “Emei” comes from its shape. Looking its winding and beautiful figure, you will find that it resembles very much an eyebrow of a girl. It is the highest one among all the famous sight-seeing mountains in China.

Today the Buddhist culture has become the main body of Emei Culture. The Buddhist architecture, music, grottos and paintings in the mountain all reflect rich religious flavor and culture. On Mount Emei, there are over 30 temples, ten of them large and very old; they are in local traditional style and most are built on hillsides, taking advantage of the terrain. In the selection of the site, design, and construction they are masterpieces of great originality and ingenuity. The advanced architectural and building techniques are the quintessence of Chinese temple architecture.

The first Buddhist temple in China was built here in Sichuan Province in the 1st century A.D. in the beautiful surroundings of the summit Mount Emei. The addition of other temples turned the site into one of Buddhism's holiest sites. Over the centuries, the cultural treasures grew in number. The most remarkable is the Giant Buddha of Leshan, carved out of a hillside in the 8th century and looking down on the confluence of three rivers. At 71 m high, it is the largest Buddha in the world. Mount Emei is also notable for its exceptionally diverse vegetation, ranging from subtropical to subalpine pine forests.

Some of the trees there are more than 1,000 years old. Associated with these temples are found some of the most important cultural treasures of China, including the remarkable Leshan Giant Buddha carved in the 8th century CE out of the hillside of Xijuo Peak. Facing the confluence of the Minjiang, Dadu and Qingyi rivers, it is the tallest Buddha sculpture in the world with a height of 71 meters.

Mount Emei is an area of striking scenic beauty. Great spectacles of Mount Emei include the sunrise and Clouds Sea seen from the Golden Summit of the mountain. The sunrise is very varied, but optimally begins with the ground and sky being in the same dark purple, soon showing rosy clouds, followed by a bright purple arc and then a semicircle where the sun is coming up.

The Clouds Sea includes several cloud phenomena, e.g. clouds appearing in the sky above, in addition to the regular clouds beneath.

Today more and more new scenery has been discovered and given beautiful names such as Listen to the Spring beside the Tiger Brook.

Plank Road above Longjiang River and Flying Waterfall Hanging over Dragon Gate. Hiking within Mt. Qingcheng with trails criss-crossing the mountain tends to be appealing for more and more tourists following Buddhism worship. 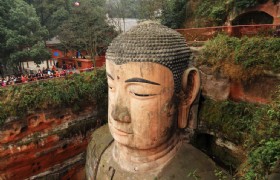