Flotillas, snacks, slides and replica monuments: OK theme parks may not be to everyone’s taste but should you have kids they can help relieve the strain of holidaymaking. After all, what could be wrong with a comprehensive catalogue of fun bound-up in one ticket price? Despite their tawdry reputation it should be remembered that theme parks assume every shape and guise, with some targeting a mature audiences whilst others are content to dish-up dollops of sugar-coated diversions en masse. 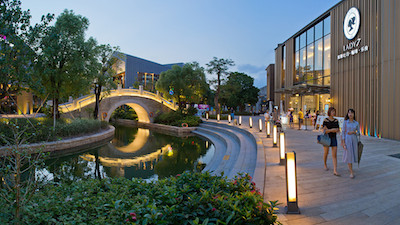 Shenzhen, in China’s deepest south, is home to some of the mainland’s pre-eminent amusement parks. Nanshan District, in particular, posses a cluster of attractions ensuring convenient travel between some of the city’s most popular parks. Indeed, they are even connected by a monorail track. So should you be Shenzhen bound, family in tow, here’s a selection of some of the city’s most notable holiday locales. 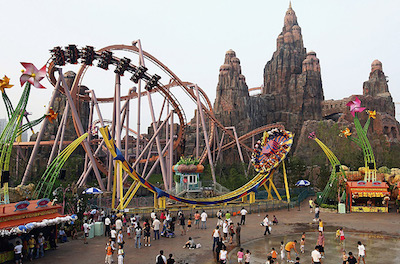 Opened in 1998, the first of what has become a nationwide theme park chain; Happy Valley is Shenzhen’s answer to Disneyland. Consider that some of the core attractions are the Golden Mine Town with its wild Mine Coaster, Mount Adventure replete with Space Port, and importantly (considering how hot Shenzhen gets in the summer) a Maya themed water park. Well you can imagine what it’s all about: family fun par excellence. Covering 350,000 square meters, the park is composed of nine different areas with distinct themes, including Spanish Square, Cartoon City, Shangri-La Woods, Sunshine Beach, Typhoon Bay and Happy Times. Boasting nearly 100 games, rides and attractions, as well as snack stores aplenty, plan for a solid day of action. There are also performances of varying quality and style, from a dismal WW2 reenactment to amazing BMX and skate displays. If there’s a low it’s how busy the place gets during the summer break, so time your visit wisely.

Window of the World 世界之窗 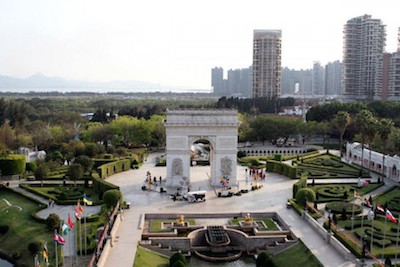 On the other-side of Shenzhen Boulevard stands the city’s most iconic theme park, if only for its towering Eiffel Tower replica which is illuminated at night. In essence Window of the World is a tad dated, hankering back to a time when few Chinese holidaymakers could travel overseas to visit the planet’s major landmarks. The solution: we’ll bring them to you. From Cambodia’s Angkor Wat to the Leaning Tower of Pisa, the Tower of London to the canals of Venice, the theme parks is, as its name suggests, home to the many (mini) wonders of the world. Were that not exotic enough, there’s also an indoor ski resort (in subtropical Shenzhen) and a European style bar street that hosts an international beer festival. The park is definitely targeting local clientele. That said if you’re looking to kill an afternoon it has a certain surreal appeal to it.

Next door to Window of the World, this integrated dual attraction has a similar feel to its occidental neighbour. However, here you’ll find Chinese culture on display. Splendid China is, in essence, a garden filled with scaled down versions of China’s greatest monuments like the Great Wall, the Summer Palace and their kin. The Folk Culture Villages attempt to present minority culture with shows and cultural exhibits provided by representatives of China’s 55 recognised ethnic groups. Of note is the Dynasty at War equestrian show where stuntmen perform famous Ming Dynasty battles.

The OCT Bay is less a theme park than it is an integrated entertainment district. It comprises several upmarket restaurants, bars, shops and hotels set around a manmade beach and lake, including the first international waterfront shopping complex and the first five-star flagship cinema. The biggest draw is the ambitious multimedia water-themed stage show, the Mangrove Groove, held nightly on the lake, replete with fountains, song, dance and some state of the art lighting effects.

Getting There: Qiaocheng East metro station. 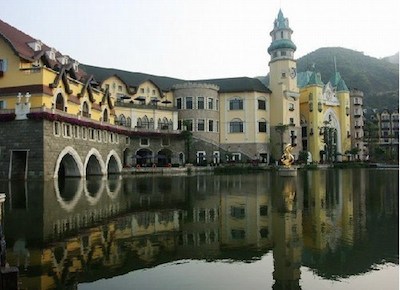 Way out east, this mountaintop resort overlooking the beach resorts of Dameisha and Xiaomeisha is a seriously ambitions development with a golf course, rollercoasters and plethora of themed hotels. That said it’s hard to say exactly who the theme park is for or what it’s all about exactly. It is divided into three principle parks: Knight Valley, Tea Stream Valley and Wind Valley. There’s also a Buddhist temple Huaxing, with affiliated Zen hotel and meat-free restaurant. Despite the cacophony of competing ideas, there’s still plenty of fun to be had. There are rides aplenty and live shows to take in of all descriptions. Of note the Indian Jones-style water show the Roaring Flood is a thrilling live extravaganza of daredevil stunts.

Entrance Fees: RMB350 to 180 depending on combination and time.