E-readers, like Kindle, are raising their presence across buses and metro carriages, but there are still plenty of people who prefer reading the old fashioned way. They stick to traditional book and library for their unparalleled vibe. Now, a newly opened library in Tianjin's Binhai New Area, maybe the coolest one in China, will make them on cloud nine. 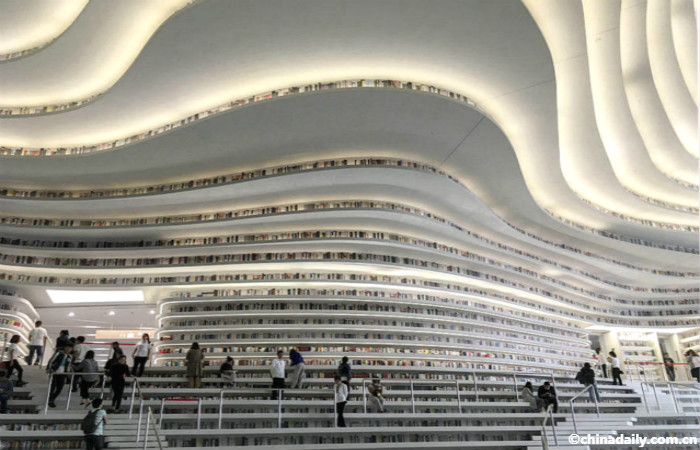 The five-story Tianjin Binhai New Area Library, touted as Eye of Binhai, covers over 33,000 sq.km. It features an eye-shaped rectilinear outer structure and a typographic interior atrium anchored by a spherical auditorium. The auditorium is surrounded by floor-to-ceiling shelves accessed by stairs, holding up to 1.2 million physical books. The surface of the auditorium is mirrored to reflect the environment and create a 360 degree panorama, thus a pensive and immersive vibe for readers.

The enormous project was materialized in three years at the helm of Dutch design firm MVRDV in collaboration with local architects from the Tianjin Urban Planning and Design Institute. The finished library, therefore, has some traditional Chinese cultural elements woven in its futuristic design. The curve shelves, resembling sea waves, imply an old Chinese saying, "Xue (学) Hai (海) Wu (无) Ya (涯)" - Reading and learning is like voyaging on a boundless ocean of knowledge. While the staircases ascending along the shelves embody“Books are the ladder of human progress".