The Mysterious and Secluded Nujiang in Yunnan

Nujiang (which literally means Rage River) originates from Jiregepa Summit of the south part of Tanggula Mountains. From the very beginning, the river appears to be mysterious and unique. Local Tibetans call it Naqu, meaning the ‘black river’. In summer the river rolls on with great raging torrents, whereas in winter the green water ripples peacefully. Nujiang slashes open the Hengduan Mountain Range like a knife. 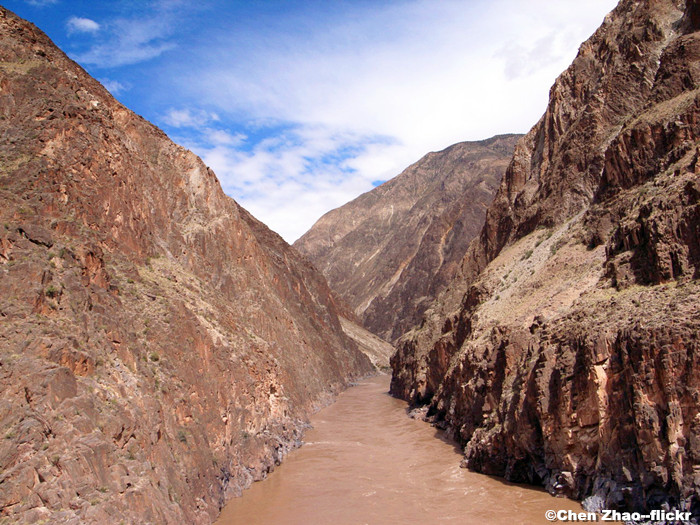 Is Nujiang really going to get outrageous? If not, why call it Rage River? Every day exactly at 7 o’clock in the morning, the clock of the old church in the Pihe village starts to toll. The sound is clear and melodious, echoing through the valley for a long time. Eventually the sun rises from behind the snowy Biluo Mountain. The sunlight turns the snow on the opposite Gaoligong mountain into a beautiful golden color. Then the quietness of the valley disappears. The church, which appears extraordinarily calm and peaceful, is facing Nujiang, as if looking down at the water rolling nonstop into the distance.

The history of the people along Nujiang is a legend of migration. The Dulong ethnic group, which as yet remains secluded, were once the first group of immigrants on the ancient Yunnan-Tibet road. Those who now live in the Pihe village are called the Nusu people, which is a branch of the Nu ethnic group. They began to migrate into this area since the Su and Tang dynasties from Liangshan of Sichuan province and Lijiang of Yunnan province westwards to settle down along Lancang River. They finally settled in Nujiang area. Now more than half of the population living in Nujiang district are of the Lisu ethnic minority, which is also an migrant ethnic group.

Dulong Girls have their faces tattooed at the beginning of adolescence. First the tattooist pricks the girl’s face by a thorn and then rubs the wounds repeatedly with a kind of black substance which is obtained by scrubbing the bottom of a pot or with dark grass sap until the color permeates the skin and allows the color to remain permanently.

However, this custom has been banned since 1949. Now there are only about thirty women who have such tattoos on the face.

In Nujiang area, the mountains are high and valleys are deep with gullies and ravines crossing each other. These characterized features form a natural barrier that helps to preserve the local culture characteristics from spoiled, but at the same time made it very difficult for the local people to keep in touch with the outside world.

Comparison with the outside world, life here is changing at a much slower pace, especially in villages where no road reaches. And even, it may take a whole day if going to a market. For those young people who live in such villages they badly need change from their too peaceful lives. Thus, they learn the outside world by adventurous tourists coming here, or few of them would go outside to see what’s new at the other side of the mountain.

Yet mysterious and unique, the secluded Nujiang and the people living there remain secrets to most people. If you have time, trek there and see the original and untouched Nujiang by yourself. I’m sure you will be surprised by its beauty and uniqueness.