Nowadays, a lot of people prefer to visit some scenic spots during their vacations. You will find it crowded if you visit some famous attractions, such as the Great Wall, Pingyao Ancient City. You will see the people rather than the beautiful sights if you go to those hottest attractions. Why not try visiting some special sight spots that few people will visit? Here are several beautiful spots that you should visit.

Sugong Tower is also called “EMin tower”, which is located in the east of Munaer village. It was built in 1778 A.D. The famous Qing dynasty general, Eminhezhuo, spent an extortionate amount on this tower. His aim of building this tower was to express his appreciation to the Qing dynasty and his devotion to the god. Sugong Tower is the biggest tower among the entire existing tower in Xinjiang. The modeling of this tower has a strong style of Islam. The height of this tower is 44 meters and the diameter of tower footing is 10 meters. The shape of this tower is conical. The whole tower was piled up by drab yellow bricks. What really surprises you is the surface of the tower. You can see there are fifteen different kinds of geometric patterns, such as triangle pattern and water ripple pattern.

Huoyanshan is also one of the well-known tourist sites in Turpan. It is located in the northern area of Turpan Basin. The total length of this mountain is more than 1000,000 meters and the widest parts of the mountain are 10,000 meters. The altitude of this mountain is about 500 meters. When it refers to Huoyanshan, people will first associate it with hot temperature and the palm-leaf fan, belonging to princess tie Shan. There is also a story about Huoyanshan and the palm-leaf fan. It is said that the monkey sun borrow the palm-leaf fan from princess tie Shan and use it to put out the fierce fire. You will also see the pole for tying up Tangsen’s horse, bajie stone while visiting Huoyanshan. It is so enjoyable to see these sceneries and listen to this legendary story.

There is a valley at the foot of Huoyanshan, which is called “putaogou”. Do you know why it is called “putaogou”? This is because that this place abounds with grapes. The grape vine in this valley is very verdant and luxuriant, which make a sharp contrast with huoyanshan. There is no wonder a lot of people consider Putaogou as the paradise of Turpan. You can also taste the delicious grape while walking through Putaogou. 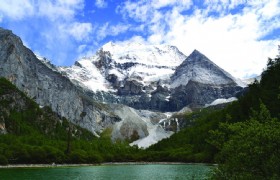 This is a specially designed tour package for you to get a general idea of the beautiful U...