The bay of Black Sand Beach is in the shape of a half moon. The width of the beach is about one kilometer. It's the largest natural bathing beach in Macao. Whenever there're Sundays and holidays as well as the height of summer, tourists poured into Black Sand Beach. Black Sand Park is located near the beach's main entrance. In my opinion, you might as well go to have a look round. 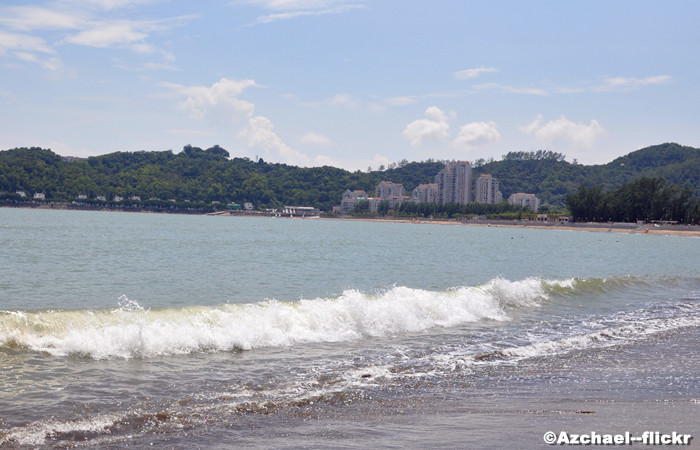 Black Sand Beach shaped like a half moon had very shallow slopes. There was one patch of the pine forest nearby, with the lush and verdant landscape. There're spacious parking lot, bus stops and catering outlets of various kinds around here. The feature of black sand lies in its black and tender fine sediments. Hence the name Black Sand Beach.

The story goes that the fine black sand is the result of the formation of the black secondary ore glauconitic owning to the designated sea environments. The glauconitic is affected by ocean currents, and removed near the shore, and brought to the beach by the wind and waves, which could make the originally white sand beach turn into the magical and fascinating Black Sand Beach. The beach was originally named "Dahuan," and renamed Black Sand Beach.

All of sand here are black. Whenever big waves threw up layer upon layer of white foams, and swashed against Black Sand Beach, people hardly ever see the sharp contrast between black and white. The peculiar feature of Black Sand Beach is that the sand not far off the left and right beach is not always black, only the sand in the patch of Black Sandy Beach shaped like a half moon is black.

Despite of the waves washing year after year, the waves cannot wash away the glistening black sands in the district. Why the sand of Black Sand Beach is black? People are saying that Black Sand Beach is formed by the black secondary ore glauconitic affected by the sea currents washing. Others say that it's the result of biotitic minerals.

There's a great deal of cultural relics found near Black Sand Beach. Among which the pottery pieces about 4,000 to 5,000 years ago and pottery-making workshop ruins as well as the coins of the Qing Dynasty are also found there. It shows you that the place had the activities of our forefathers as early as the Stone Age.

In recent years, the similar cultural relics were also unearthed in Zhuhai, which has also suggested that Macau and Zhuhai were originally imbued with the same spirit. There're many recreational activities around the beach. On the beach are streams of people bustling about on Sundays and holidays. The beach would be as full of bustle and excitement.

I just followed local advice for my itinerary. The camping trip to Black Sand Beach is highly suitable for those people who visited on their first trip to Macao. Black Sand Beach receives graciously the visitors from far and near. As a result, I would like to remind you of valuing it and keeping your behavior in check