What to See at Qinghuang Island

Qin Huangdao is a beautiful city by the sea at the north of China. Because the first emperor of China Qin Shihuang cruise here in 215 BC, and sent people to look for the immortal on the sea .And Qin Huangdao is the only city which named by the emperor epithet.

On the south of Qin Huangdao is the BO HAI sea, on the north is Yan Shan, and the neighbour on the west is Beijing and Tianjin city, neighbour on the east is Liaoning province. Qin huangdao is famous for the First Pass Under Heaven, the Mengjiangnv temple and the Dove Nest Park.

Shanhaiguan is an ancient city with a long history of culture, and it is one of the representative image of the Great Wall of China. The Ming dynasty city wall in the old Shan haiguan city is in a good save condition, and the main streets and alleys kept intact, especially  a batch of courtyard dwellings maked the ancient city more elegant.The First Pass Under Heaven bring essence of the ancient Great Wall of China  together, It’s one of the northeast pass of the Great Wall, and it's called the First pass under heaven.

Mengjiangnv Temple is the product of the folk folk culture derived from the Great Wall culture, which represents the panoramic view of the first of China's four big folk tales of "the story of Mengjiangnv”. With this main line “Mengjiangnv look for his husband with tears and made the Great Wall pull down”, you can feel Mengjiangnv’s predicament difficult to find her husband, and make you deeply understand the touching love story.

The Dove Nest Park is located in the easternmost point of Beidaihe, which covers an area of 300 mu. The Dove Nest Park is famous because of a great man in China: MAO ZEDONG. It is one of the most classic representatives of Beidaihe resort. Sunrise at sea is the most famous landscape, if you come to the park in summer, you can see that there are thousands of visitors come here to see the sunrise! Of course, the most fascinating season to come to Beidaihe is summer, then when you come here, you must pay attention to prevent bask in, because the air is very good, so that the ultraviolet ray is very strong. 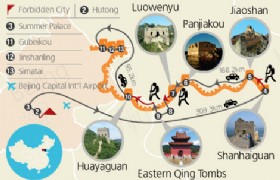 Wild or restored, ruined or well-preserved, whether for stunning scenery or fantastic p...