Archaeologists have proved that there are a great number of eminent natural tour resources in Ya'an, which do positively contribute to bring enormous capability of abstraction and development in lie fallow, tourism, and science research, etc. However, the entire world there had changed since that year of 2013.

An unexpected misfortune caused serious losses to the originally beautiful ancient Ya'an city. The giant panda is weeping and sorrowing, tea bushes at the slopes of the hills have long and high-pitched like a wine or plaintive crying, so much happiness is covered and lost all around. The burst of catastrophes not merely bring an enormous loss to people's lives and material property, but also leave the people with a feeling of deep and far-reaching hurt to the relevant personnel of disasters.

Do you still memorize that big Wenchuan earthquake of 2008 which is regarded as the largest earthquake after the founding of New China? The earthquake magnitude of that year had measured 8.0. Every increase of one magnitude, the destructiveness of earthquakes would increase over 30 times. Take a good look at the contemporary state in Ya’an; it is not inconceivable that the state of 2008 could be so awful and tough.

Yet the amazing thing is the case that the people of Wenchuan carried it through. Construction of the Wenchuan Home, gets the concern and support from the party and government, receives strongly assistance, subscription and the true feelings of dedicate among the people. With the strong beliefs and determination, the people in Wenchuan spare no efforts to rebuild their own beautiful homes on the almost vast fields in ruins; they just make the children have the happy life of today.

Wouldn't rebuilding speed of our Ya'an city slow down by virtue of lessening of the earthquake magnitude? Absolutely not, I believe!

Through the ages Ya'an overlooks a main entrance and exit route of both East and West, it's the source or head of the famous "Tea and Horse Old Way" in history. It's the flourishing and prosperous road, particularly the thoroughfare for all unscrupulous parties. Couldn't the people in Ya'an hold such one important line of communication without boldness and great courage?

Of course not, the lovely people in Ya'an had always been bold, fearless of the hardships, dangers and difficulties and become brave and staunch. Where is unlimited torment? No. In their patient, generous bosom they bear the anguish of a world. People in Ya'an regard all kinds of hardships as nothing but an episode in life. They'll drive through obstacles! Go at it tooth and nail!

In China, everyone knows that Sichuan people prefer to both spicy and pungent. It is my belief that the Ya'an people with such character could be like eating hot chilly peppers, fear nothing and can eat anything, even go through the hoop. 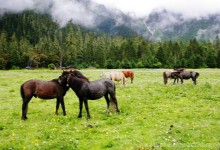