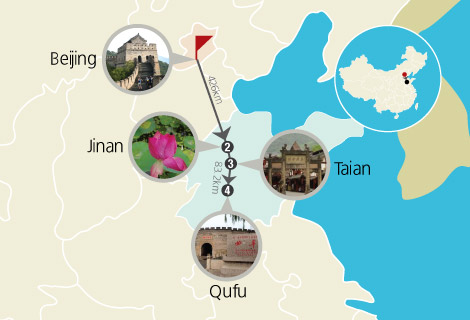 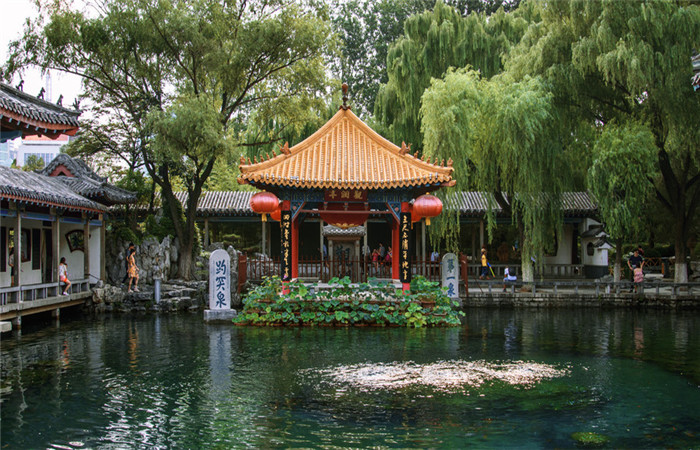 This 3-day private tour takes you to deep dive into the rich traditional culture of China: Confucius culture. Visit the renowned Temple of Confucius, Cemetery of Confucius and Kong Family Mansion. Also explore the natural beauty and historic sites in the famous Mount Tai.

● Mount Taishan ● Temple of Confucius ● Cemetery of Confucius ● Kong Family Mansion
100% SATISFACTION
My order
If you have exchanged email with us and received all necessary information, please type your order number here, pay now to secure your booking.
Pay Now

Our guide will pick you up at your hotel in Beijing and transfer you to Beijing South Railway Station. You will take the morning train to Jinan. Our guide in Jinan will meet you at the railway station and take you to have lunch.

Baotu Spring Park is where the famous Baotu Spring located. Baotu Spring Park is located in the center of Jinan, while Baotu Spring is situated in the center of the park. This is a natural rock and spring garden park famed for its beautiful scenery, its splendid constructions and architectures, and the profound culture it bears. Baotu Spring is famed as the best of the 72 named springs in Jinan. It retains an 18 degree temperature all the year round. The Baotu Spring is curled up with fairy mists in cold winter, which creates a fascinating view with the surrounding exquisite pavilions and halls. Pure as its quality and mellow as its taste, Baotu Spring has spectacular sights of water jets when water coming out from the underground limestone and forming magnificent water jets which may reach as high as 26 meters. You will surely be captivated by this beautiful park and its impressive springs.

Dai Temple situated at the foot of Mount Tai is the largest and most complete ancient building complex in Mount Tai area. Dai Temple was first built in Qin Dynasty and it used to be the place where emperors stayed and offered their sacrifices.

At last, our guide will transfer you to the hotel in Qufu for check in.

Mount Tai is one of the “Five Great Mountains” in China. It is located in Tai’an County, in the middle of Shandong Province. With its unique natural beauty, historical and cultural significance, Mount Tai is regarded the leader of the five great mountains and is the most climbed mountain in China. Despite its enchanting scenery formed by peaks, valleys, waterfalls, rocks, flora and fauna, Mount Tai is remarked by its four spectacles of Sunrises from the East, the Sunset Glow, the Sea of Clouds and the Golden Belt along the Yellow River.

At the same times, Mount Tai is abundant in historical and cultural relics and artworks. It also plays an important role in the development of Buddhism and Taoism. For anyone fond of mountain climbing and gorgeous natural scenery, Mount Tai should not be missed out.

Day 03 Qufu - Beijing (High-speed Train)
Detailed Itinerary:
After breakfast, our guide will pick you up at the hotel and bring you to visit the renowned Three Confucian.

Qufu is located in the southeast of Shandong Province and it is the hometown of Confucius. With its numerous historical palaces, temples and cemeteries, the Three Confucian is the most famous. They are Temple of Confucius, Cemetery of Confucius’ and Kong Family Mansion.

After the visit, our guide will transfer you to Qufu Railway station and you will take the High-speed train G146 back to Beijing. The train sets out at 6:00PM and arrives in Beijing at 8:00PM. Our guide in Beijing will pick you up and transfer you to your hotel. Thanks for having this trip with us!

Temple of Confucius is the largest and most famous of the temples of Confucius in China. It has a large occupation of 16,000 square meters and a large-scaled complex with a number of 460 rooms. The temple was first built in 478 BC and after several times of reconstructions and expansions, the temple has become one of the three largest ancient architectural complexes in China. With its grand size and constructions, and its numerous historical and cultural relics and artworks, the Temple of Confucius is really museum to get to know Confucius and Chinese history and culture.

Cemetery of Confucius is also known as Kong Lin is where Confucius and many of his descendants are buried.

* This is a private tour, only you and your family or friends will be in this tour. Please feel free to contact our tour advisors if you need any changes of itinerary, hotel or anything else, we would adjust the tour for you.
* Prices may vary according to your travel time and are higher in the high season, e.g. Labor’s Day, China National Day Holiday, and Chinese Spring Festival. * If only one person is traveling then the single room supplement is not required. If, for example, three people book a hotel, with two in one room and one in another room, the single room supplement must be paid.  * Prices are based on groups of 4 people or more.