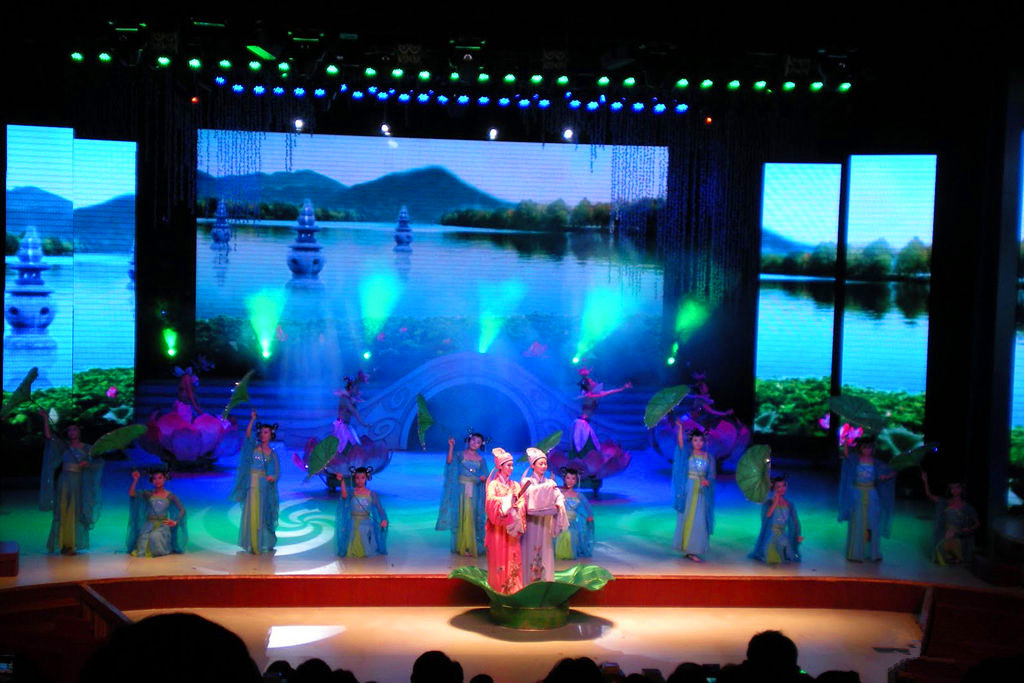 Performance named Night of West Lake is a famous night indoor show in Hangzhou (Not on the West Lake). It is as same famous as Impression West Lake and The Romance of the Song Dynasty. The performance showcases the culture of the region and last around one hour. Songs, dances, opera, acrobatics and stunts are integrated to present the ancient civilization and customs of Hangzhou. There are five scenes as described below.

The First Scene - Soldiers Training Performance by Wuyue Ruler
This scene is a recreation of solders training in the Wuyue State over one thousand years ago. The drum and horn are the two main instruments used in this scene. In ancient China the drum and horn were used in the army to call the solders to action, just like the bugle used today. In this scene the soldiers rush to the stage and stand in line, then Qianwang, ruler of the Wuyue State, appears on stage and direct the training performance.

Dating back a thousand years, this scene is deeply rooted in the Wuyue culture. Hangzhou came to prominence in the Wuyue State Period when it served as the capital of the kingdom. Since then the city has gradually become one of the nation’s most important economic, cultural and political centers.

The second Scene - The Prosperity of Southern Song Dynasty
Hangzhou reached its political and economic pinnacle in the Southern Song Dynasty. Marco Polo is believed to have visited China during this time. He was amazed to see cities with over a million people, bustling commerce, and busy river and canal traffic. He think Hangzhou is the most prosperous city at that time in the world

The Third Scene - The Romance of Liangzhu
This performance is based on the tragedy of Liangzhu, a well-known romantic story in China. The performers tell the story using body language, dancing, and acrobatics. Combined with excellent singing they present the story quite effectively, bringing tears to many eyes.

The legendary West Lake is where many romance stories and legends allegedly took place. The "Romance of Liangzhu", "Legend of the White Snake", "Love Story of Suxiaoxiao" and "Yuanyu" all have their backgrounds here.

The Fourth Scene - Artistic Qiantang
Ancient court music is performed in this scene. The music was created for the enjoyment of the Chinese emperors. They are very melodious and will remind you of bygone years. Pretty girls in elegant silk dresses will dance gracefully to the melody. Hangzhou is famous for its silk production and beautiful women. Another feature of this scene is the tea harvest dance

The Fifth Scene - Get Together at the West Lake
This scene includes drumming, dances, modern shows and cartoon performances. Regardless of whom you are or where you are from, come to West Lake and enjoy its many breath-taking sceneries.

Popular Hangzhou Show
Impression West Lake...
The Romance of the S...
Hangzhou Grand Canal...
My order
If you have exchanged email with us and received all necessary information, please type your order number here, pay now to secure your booking.
Pay Now