The Romance of the Song Dynasty (Hangzhou) 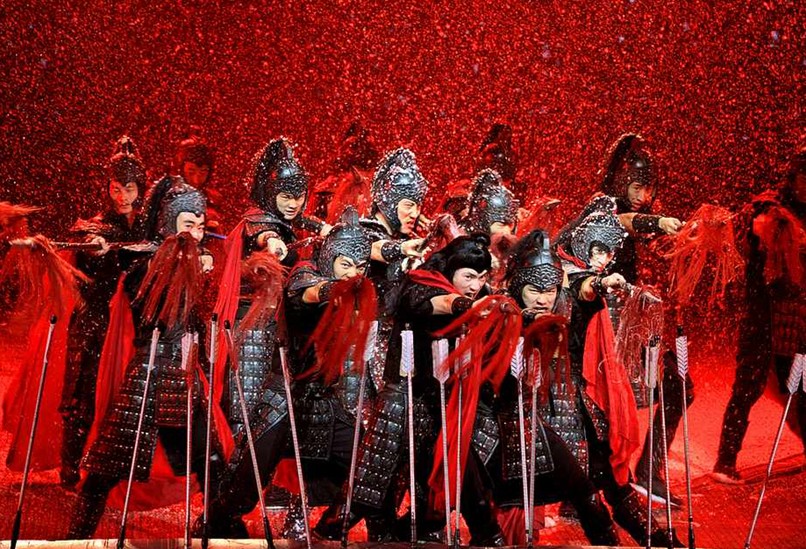 Romance of Song Dynasty is a large-scale performance and wins the award of national five-one project and the lotus award, which is the top honor of Chinese dancing. This is a huge review of glorious history and culture of Hangzhou, themed with the historical anecdotes, myths and historic events, mingled with the world-class dancing and acrobatics. It shows a dreamlike environment by way of the modern high-tech platform and brings the audiences a great visual shock. Up to today, this great show has been performed for more than 11000 times. The number of audiences has been over 25 millions , and annually, there are 3 million tourists enjoying this show. It is also the performance with the most times of performance and largest reception in the world, and boasts one of the world’s three top famous shows: O Show Las Vegas, French Moulin Rouge and Hangzhou Romance of Song Dynasty.

The performance is made up of five sections: the first part is highlighted with the civilization light of Liangzhu. The local people of Hangzhou created a great prehistoric civilization. This part show based on this historic discovery is themed with the worship to sun, the primitive sacrificing dancing, picking dancing and rice-planting dancing. It is preparation part of the coming glory of Song Empire. The next part is mainly about the feast and dancing of imperial palaces. It is the show of the glory and power of South Song Dynasty. The third part is the warring time – shining spears and armored horses. In 1127, troop of Jin invaded Bailiang and captured Emperor Huizong and Emperor Qinzong of North Song Dynasty, and this historic event is called Jingkang Incident. Song was forced to move to south China. Zhao Gou, the ninth son of Emperor Huizong established South Song Empire in Hangzhou. And Marshal Yue Fei led his troop to fight against the north invasion in order to win back the lost land. This part is themed with the fighting experience of Yue Fei’s patriotic movement. The third part is the folklores of West Lake, and it shows the romantic love story of Lady White Snake, the Butterfly Lovers and many impressive local legends. The fourth part is the classic affection beyond the time; it is the end of the whole show.

The Romance of Song Dynasty together with Impression West Lake and West Lake Night Show is one of the best evening shows in Hangzhou.