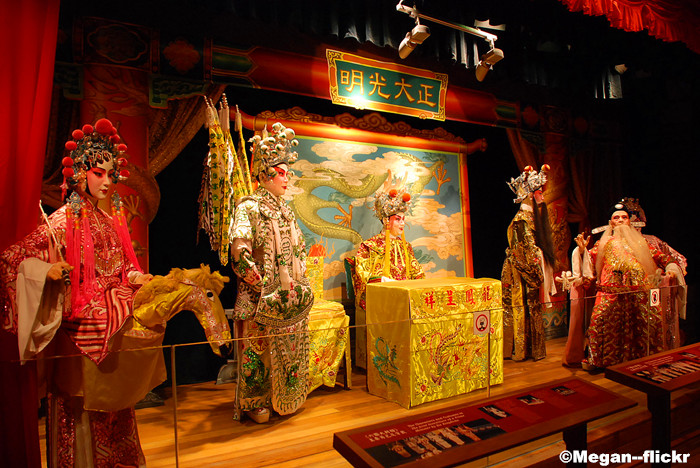 Cantonese opera also has its specific acting roles which are easier understand by people. There are four main roles:

-Sang is a male role of the opera

-Daan is a female role

-Zing is known for painted-faces

-Cau is a kind of Character who plays the clown figures.

Applying the make-up for the Cantonese Opera performances require patience and skill. The most common look is the white face with pink eyes and black thin elongated eyebrows with complementing lips that are always painted red. The eye make up is important as creating the "Phoenix Eye" effect is a major part of the look, if the effects of make are not noticeable the actors pull back their hair and tie it up tight to life the corners of the eyes. According to the different characters the make-up varies for the different roles.

The costumes of Cantonese Opera has its own rule, which different roles should wear the proper clothes so that it can satisfy the need of the roles. The costumes are decorated with intricate details and for those who are a fan of Cantonese Opera just by looking at the costumes can distinguish the role. The more elaborate the costumes the higher the social status of the character, actors who play officials usually wear dragon embroidery costumes and those in the roles of the Sang wear less vibrant colors.

Where to see Cantonese Opera in Hong Kong

Koshan Theatre was first opened in 1983 but due to bad design it was refurbished in 1994 and re-opened to the public in 1996.