Hong Kong is known as the “Culinary Capital of Asia”. Indeed, visitors can taste the gourmet food and wine in the “Hong Kong Wine and Dine Festival”, they can also enjoy the delicious Canton food, authentic Asian cuisine and food all over the world. According to statistics in an article about Hong Kong cuisine, Hong Kong has more than 11,000 hotels and restaurants, if three meals a day, each meal for a different restaurant, it takes about a decade to eat all over the restaurants, which implied that Hong Kong is indeed a gourmet city.

Today’s Hong Kong is full of delicious and surprises. October 27 - November 30 is Wine and Dine month, and American Express International Inc. once again became the sponsors. Hong Kong Wine and Dine Festival firstly opened the food and wine feast, gathering global cuisine, music and entertainment, so that the public food-lovers can enjoy themselves as much as possible.

During the event, there were exciting performances at the venue every night, such as jazz, pop stars singing and dancing and other activities, a real treat as well as a feast for eyes. Before entering the venue, visitors were presented a wine glass made in German, with black velvet cover, inside which there were coupons for alcohol or food.

It was said that there would be some famous singer that night, but in the end I couldn’t remember now, only know that the one on stage was hard to sing, and the audience listened very carefully!

These food-lovers were seriously watching the performances right now!

Watch for a while would be enough for such scene, I did not stay for a long time, but go to find something to eat first! Or there would too many people after the show ended.

Event brought together wine from 19 countries and regions, and a total of 280 liquor and food booths. But I’m not good at drinking, so the wine coupons sent to me that day were almost wasted, what a pity!

I like to eat, but each stall has a lot of people in the queue, it was not easy to find something to eat, the lucky one who got some food would generally have such expression. This is the food from the Novotel Citygate hotel’s banquet.

I got around holding a cup of wine, but at last, I still could not drink all of it. And I brought back the wine glass as a souvenir.

There were about 70 food booths offering a variety of dishes at the scene, including the winning dishes of “Best Culinary Awards”, dishes from the famous Hong Kong hotel and restaurant, Western, Asian and local delicacies, Chinese and Western desserts, and so on. This is also the food from the Novotel Citygate hotel’s banquet.

This is also the food from Novotel Citygate hotel’s banquet.

This is Hong Kong Kowloon Novotel Hotel I stayed for a night, located at the center of the main road. Nearby attractions include the Avenue of Stars, Clock Tower, Hong Kong Museum of History and the Hong Kong Space Museum.

Novotel’s rooms are full use of natural light, decorated with warm colors and soft materials. Each room is equipped with all comforts, including acoustic set, opaque curtains, coffee pot and teapot, safe, minibar, and international television channels. 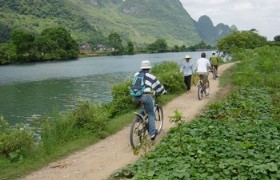