Have you ever gone to this small famous garden?

There is no reason that once you meet into one place, you will become crazy about it, or you can call it as either a surprise or an excitement, it will be better for getting rid of the crowned modern world, so what’s in your mind? Let me give you some advice here.

Baoting, which is located in the middle south of Hainan province, stays near to Sanya; different from Sanya which is famous for its ocean scenary, rain-forest, hot spring, custom, countryside and country food are the most charming and graceful characters of Baoting, it is called as the garden in Hainan Island.
Standing in the rain-forest of Baoting, the pure oxygen which totally differs from the cities makes you want to absorb the air deeply and hardly, again, the unique scenary in various locations is worthy to explored. About 9 km far from the city center is the Qixianling National Forest Park, the Global hot-spring has won a great reputation of medical, beauty and health care; and far along 48km, it is the biggest Xianlong cave in Hainan province and Xian’an stone forest with an area of 500 square meter. What’s more, there are also another famous rain forest waiting for you.

Facing the rich tourism resources in Baoting, any tourists can DIY their traveling journey according to their fancies, time and members, especially it is winter in most places in China, if you don’t like the cold winter and prefer to the cool spring day, it is the best time to have a reversal travel, and it is also my next plan.
Another famous feature of Baoting is that it is the Li & Miao Nationality autonomous county and the population there is nearly 100,000. Being inherited from generation by generation, Miao Nationality has created rich and colorful ethnic culture as well as many touched and moved legacies; besides, the magnificent ballad, the Hainan ethnic instrument, country music and dance are mostly attractive.

The Seven fairies water-sprinkling festival on lunar 7th, July has become the noble brand of Baoting civilization, deriving from the older qualifying contest, the noble water fetching activity, large national music show, water-sprinkling parade and the traditional athletic competition at present are the favorite events of the local people and tourists.

I also want to remind you to think about the local meal for a little bit, it will be a pity if you haven’t tried the famous country characteristic food. The four famous dishes are stone-scale eels called the fish that can surf, Shiling chicken named the chicken that can climb up to the tree, the cow that don’t want to enter into the cowshed together with the traditional green-bamboo rice and colorful rice of Miao nationality. 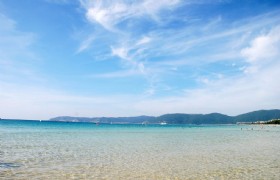 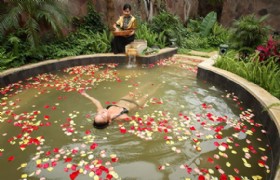