When travelling in Tibet, one temple can never be missed as the same famous as Potala Palace that is Jokhang Temple.

Jokhang Temple is a very important pilgrimage destination for Tibetan Buddhists. Many devout Buddhism adherents come from all around of Tibet show their sovereign respect by using their knees and hands pray on the floor. They are circling around the Jokhang Temple on foot for praying to prostrate on the ground every step. More Buddhists are always prostrated and undertaken in the plaza in front of the temple from day to night. It is said that Jokhang Temple is the spiritual heart of their belief. 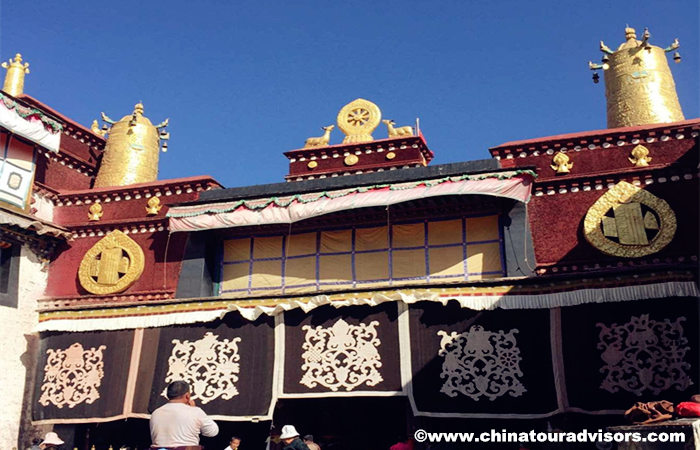 The history of Jokhang temple is about 1300 years old which called the sacred temple by Tibetan. It is the first Buddhist temple in Tibet. All of the Tibetan Buddhists go on a pilgrimage to Lhasa whose destination is Jokhang Temple. No matter where they come from, they respect Jakhang Temple as their god in the heart. It is said that Jokhang Temple originated from the time when King Srongtsen Gampo of Tubo Kingdom built a temple in the mid-7th century for the real image of Sakyamuni by his Nepalese wife Princess Bhrikuti who brought the image from her homeland. King Songtsen Gampo is an actively promoted Buddhism in Tibet. He was successfully married Princess Wen Cheng of Tang Dynasty, who also brought another real image of 12 year-old Sakyamuni. Two valuable images were treasured into Jokhang temple but the statue which bring by Princess Bhrikuti was destroyed after many years. So the statue brought by Princess Weng Cheng is the only one left real image of Sakyamuni of the world. It is a worthless treasure of the world. 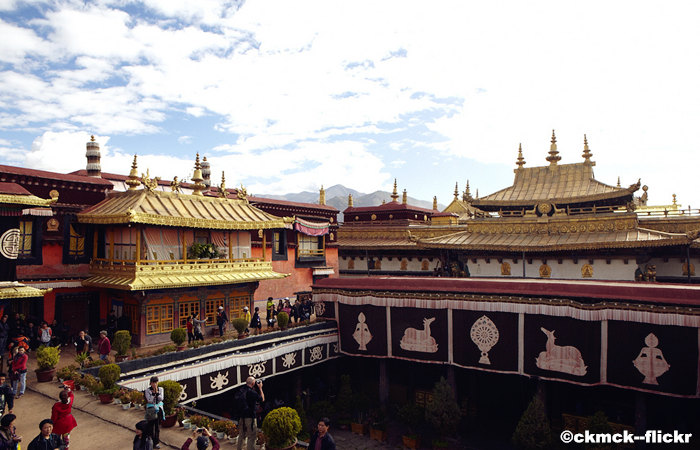 Besides the precious real image, there also have plenty of other amazing treasures in Jokhang Temple. It is really worth to appreciate. Walking in the hall of Jokhang temple, you are certainly shocked by the atmosphere of the temple. You can see countless precious stones everywhere, read precious stones, blue precious stones, diamonds, pearls, etc. Most of them are too big to imagine. Look around the wall in the temple, there are many beautiful frescoes painted by all sorts of color jewel power so that it can be stored for a long time make the painting looks really amazing. 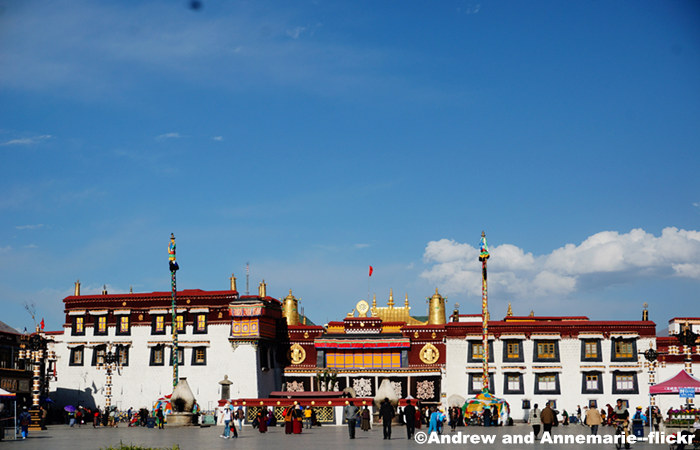 One famous fresco in Jokhang Temple tells a legend that a lake site was chosen to build for the temple. After many failed attempts to build this temple in the region because of the water flooded from a lake. Princess Wend Cheng found there was an evil spirit lived with the lake was her heart. Wen Cheng advised the witch must be demolished by filling the lake using many sheep to carry soil from a mountain far away. And finally the temple was built successfully. 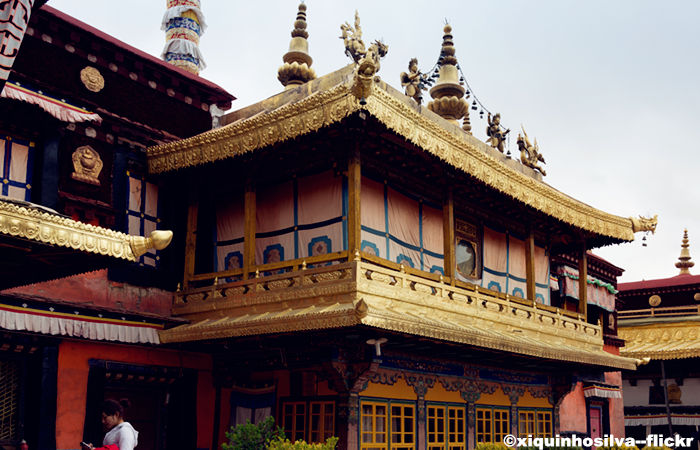 The smell of butter lamp makes the temple feels more mysterious, seems so much stories to be told. Wandering in Jokhang Temple can bring so much peaceful for people especially for those who live in a full of challenging environment. So that their heart will become more pure and desire is less.