New Year is around the corner! Burning incense and praying in a temple during the New Year have long been considered lucky in China. And for visitors, temple itself is a holy travelling highlight that nobody wants to miss. Would you like to have a try? Let is explore the oldest temple in Macau today, A-ma Temple. 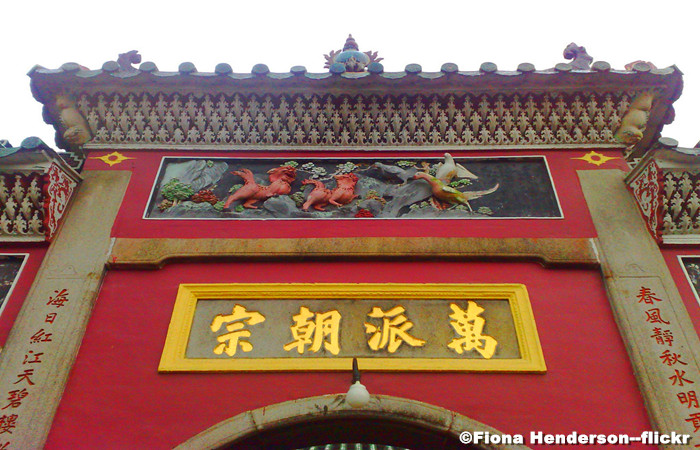 A-ma Temple, located at the bottom of Pehua Hill in the southeast region of the Macau Peninsula, was built in the Ming Dynasty (about 1488) and renowned as the oldest Buddha Temple in Macau. It was built by ancient people to commemorate Mazu, a sea goddess who bring good luck to the fishermen as local people made a living by fishing in the past. In Macau’s history, the original of “Macau” has something to do with A-ma Temple. It is said that once the Portuguese landed near the temple and asked local people what the name of this land is. But the local people could not understand what they said and told them the name of A-ma Temple- “Ma Ge” mistakenly. Since then, the Portuguese began to call this land “Macau”.

With a history of over 600 years, the A-ma Temple concludes shrines built in Ming dynasty, prayer halls, pavilions and gardens, which is recognized as a combination of magnificent Chinese architectural art. As a working temple, it is crowded on the morning of Chinese traditional festivals, such as the Spring Festival, New Year and Mid-autumn Festival. Every year, millions of Pilgrims from all over the world gather here, burn the incense and blessing their beloved family. Usually, the temple is bustled in the morning, but quiet in the afternoon.

The Hongren Hall is the oldest one among all the architectures inside the temple. When you enter the hall, you can see the statute of Mazu, holy and spectacular. People typically come here to worship Mazu, because she was intelligent enough to guide ancient fishermen through dangers. Besides Hongren Hall, the Hall of Avalokitesvara and the Zhengjiao Chanlin are also attractive in A-ma Temple. The former one is simply consisted by stones and bricks, representing a simple but special architecture style, while the latter one is a Buddhist hall features elegant Chinese designs. Wandering in the temple, it is so good to appreciate the famous Chinese Poems carved on the cliffs, from which we can get to know more about the history of A-ma Temple as well as Macau. Spending a single morning sightseeing in the temple and pray for good fortune is a perfect choice on New Year’s Day.

Whether you believe or not, it is never be a bad choice to head for the A-ma Temple with family on New Year’s Day and pray for good luck in your coming year of Horse.

Travel Tips: 1. A-ma Temple is free to everybody who desires to make worship. 2. We recommend you to go there by bus. You can take Bus No.6, No.8, No.9 and 28B. 3. A-ma Temple is bustled with prayers on special Chinese Festivals, especially on the New Year or Spring Festival. Please take care of your belongings.