Santan Yingyue also popularly known as the Three Pools Mirroring the Moon is in fact an isle in the south middle portion of the West Lake scenic area in the city of Hangzhou. This isle is actually the largest one amongst three other isles, the two others being the Huxinting and the Ruangong Islet. The area of Santan Yingyue Isle is about 7 hectares which corresponds to approximately 60,000 square meters. The neighboring of the isle contains a dike, and a lake is also present on this isle. 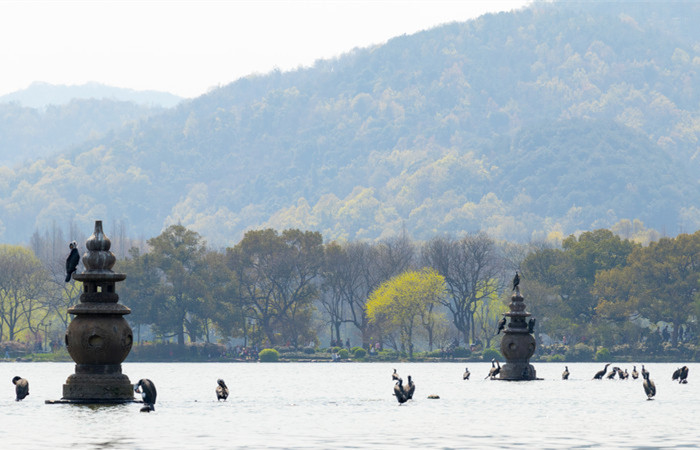 The design of the isle is rather delicate and stunning. The flowers here are different in all the four seasons. Customarily, Santan Yinyue was associated to be a fairy on the water. The name three pools denote to the three pear-shaped pagodas organized in the water in the shape of triangle. Established in the year 1090 by the public official and the poet, Su Dongpo, the purpose of the pagodas were to point out that lotus plants and water chestnuts were not permitted to be developed in the area to avert silt from accumulating up in the lake. He built these pagodas in the Northern Song Dynasty. However, the pagodas were destroyed in the Yuan Dynasty. Far along, through the rule of King Wanli in the Ming Reign, the three pagodas were reconstructed. The prevailing ones were rebuilt in the year of 1699 in the 38th year of Ruler Kangxi's control in the Qing Dynasty and a stele with his engraving was created near to this site. 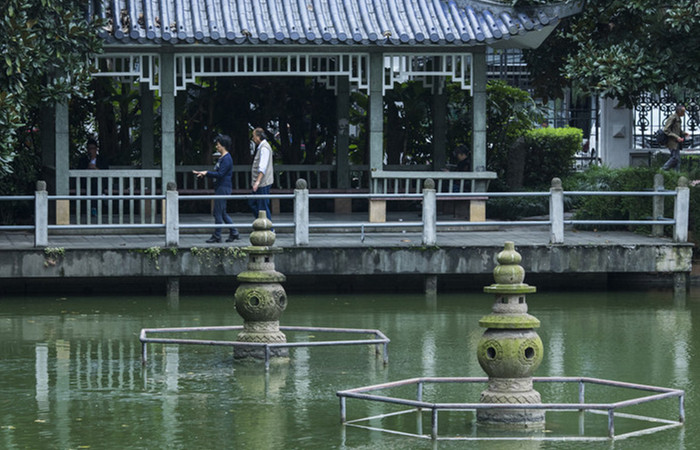 Descriptive features:
The pagodas are about 2 meters tall with hollow insides. The pagodas are dispersed as an equilateral triangle’s angles with each side being 62 meters tall. The middle of each pagoda has five round holes, into which candles or lamps can be positioned, particularly on mid-autumn nights when the lively moon hang down in the sky. When the round holes are enclosed with pieces of thin paper, rays of light will mirror on the water through the holes. The moonlight, lake light and the light of the lamp adds vivacity and charisma to one another. Presently, pagodas can be clearly seen as a prominent symbol of the West Lake scenic area. They are even used as a background image for the paper currency of 1 Yuan RMB in China.

There is a Hangzhou traditional legend stated that the three pagodas are the three legs of an upturned incense burner, and the body of the burner is underneath the surface with a large snake head (a type of West Lake fish) bent on it. Most natives of China compare the island of Santan Yingyue with that of the small Yingzhou. Yingzhou is a mythical island located on the east sea. Thus, according to the aesthetics and traditional culture, this island contains a superior status. On the Santan Yingyue Island, there are a little small lakes in it and small isles inside these lakes. Old bridges, lovely pavilions and ornamental low banks are scattered all around this island.