Though Uyghur food and snacks like lamb kebabs can be found throughout China, these Uyghur food and snacks somehow taste best when traveling through Xinjiang. Ethnic groups in Xinjiang generally have different cooking and eating methods. Han people in Xinjiang use chopsticks while Kazakhs eat with their hands. Ceremonial foods for certain groups include horse milk for the Kyrgyz and sheep entrails for the Xibe.

Uyghur-style breakfast is tea with home-baked bread, hardened yogurt, olives, honey, raisins, and almonds. Uyghurs like to treat guests with tea, naan and fruit before the main dishes are ready.

A common Uyghur dish is lamian, a noodle dish likely to have originated from the Chinese lamian, but its flavor and preparation method are distinctively Uyghur. It is a special type of handmade noodle, made from flour, water and salt.

Another popular Xinjiang dish is dapanji, is a spicy hot chicken stew served on a big plate, and after the chicken has been eaten, wide flat hand-pulled noodles are added to the gravy. Other featured Uyghur food are also tasty. The stuffing for Roasted Dumplings is made from first-class mutton, with added onions, salt and pepper. After wrapping the stuffing in dough, the locals roast the dumplings in a big oven for about 20 minutes.

The roasted dumpling is really delicious with its rather crispy skin and tender stuffing. Sanzi is one of the Hui snacks eaten at festivals. It is considered as a table delicacy for giving guests a special treat. To make Sanzi, you should mix the flour with oil, Chinese prickly ash and egg white to make dough. And then, pull the dough into thin noodles and deep-fry the noodles in oil for several minutes. Zhua fan is another famous dish in Xinjiang. And Baiyang Restaurant is the best option for you to taste the genuine Zhua Fan.

As a city inhabited by minority nationalities, Turpan is famous for delicious Uygur snacks, which are quite like those in Urumqi. Famous snacks such as Kebabs, Nang, Zhua Fan are visible at every corner of the old city. A bite of any of these snacks will give you a flavor that will linger in your memory for quite a long time. Kebabs are a kind of snack originating from the Uyghurs in the Western province of Xinjiang and a popular dish in Chinese Islamic cuisine. The dish has since spread across the rest of the country and become a popular street food.

Xinjiang is also distinguished by its fruits, especially the Turpan grape. Xinjiang Dried Grapes enjoy great prestige both at home and abroad. Benefiting from the advantageous geographical position, the grape here has rich sugar content. There are hundreds of grape varieties here, and in harvest season, you can see people eating grapes everywhere in the city as their staple food.

This special phenomenon is rare in other parts of China. When coming to Turpan, you should taste the 'grape banquet' for yourself. 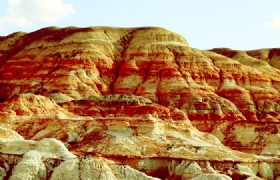