Shika Snow Mountain, Shika is the Shangri-La Tibetan transliteration, meaning “the mountain of wapiti”. In Tibetan Buddhism allusions, wapiti is the most intelligent animals, meaning "good luck, longevity ", hence Shika snow-capped mountains is also known as the heart the "Shangri-La", and is the saint mountain of Shangri-La.

In the history, Shika snow-capped mountain was the hub of Tubo and Nanzhao, and was the first holy mountains to enter Tibet on the Yunnan-Tibe Tea-Horse Road during the Tubo period.

Shika Snow Mountain is a seasonal snow-capped mountain, with altitude of 4500 meters. Even if there is no snow covered, there are still eyeful white clouds viewed from distant.

Down from the peak, the clouds had gradually dispersed, the sky became cleared, the blue transparent. You can clearly see the Tram following tracts of pinewood.

I would like to mention that we visited Shangri-la with this tour Explore Shangri-la 8 Days Tour , great indeed! 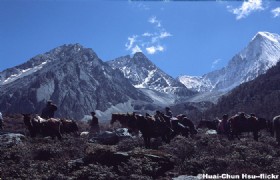