Shoton Festival, is a traditional Tibetan festival, and is currently a legal holiday in the Tibet Autonomous Region, annually held in Tibetan calendar by the end of June and early July. Shoton Festival means a festival of eating yogurt. Because there is a grand scale sunning of the Buddha ceremony and grand and warm Tibetan opera during the Shoton Festival, so the festival is also called sun Buddha Festival, or Tibetan Opera Festival. This day, the Drepung exhibits a 30 meters high and 20 meters wide silk statues on the hill outside of the temple, thousands of Tibetan Buddhists from all over the world flock to Lhasa, with the most pious heart, one step at pilgrimage the supreme Buddha. Come near to the Buddha, and threw Hada to the Buddha, which like snowflakes, so the Buddha gathers thousands of Hada. 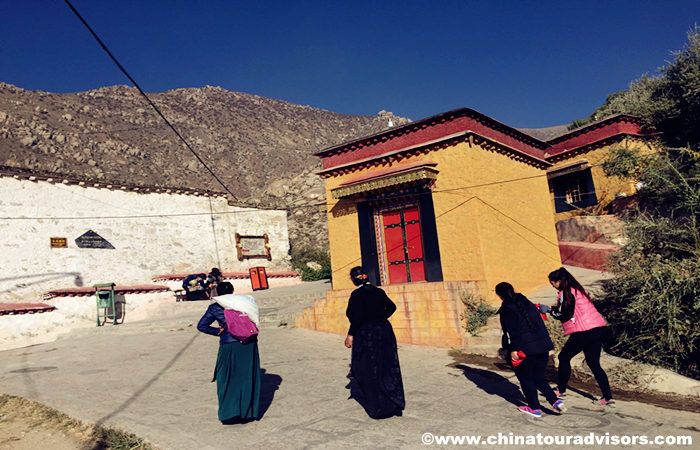 The early morning of the holy city - Lhasa

The Tibetans flocked to the Drepung Monastery to worship, somebody even embrace with a child.

The elderly handed on crutches.

There are a lot of armed police and security personnel to maintain order.

There were so many people, crowded, inevitable accident.

There is a small trail next to the armed police in a shunt junction which can directly reach the Buddha platform.

There were a lot of Tibetan people around watching the Buddha in the distant, handheld prayer beads, sat quietly.

These were the Tibetan people from Shigatse to worship, with homemade highland barley wine, has been greeted us to drink warmly.

Tibetan people are kind and friendly. The affable grandfather was still good spirit, and he was always smiled to the camera, touching.

At the end of viewing Buddha, the Tibetans sat on the floor to have a rest at the roadside and woods.

There were some Tibetans playing and singing in the woods.

When we down the mountain at noon, there are still many Tibetans to viwe the Buddha.