Wanfenglin Scenic Spot is composed of nearly twenty thousand picturesque cragged peaks and wooded mountains. From the edge of Qibang plateau with the altitude of over 2,000 meters above sea level and on the north bank of Wanfeng Lake, and the eastern shore of Huangni River, it opened out into the shape of a fan and stretched away for Anlong and Zhenfeng.

North-to-South Fengling with the miraculous and beautiful landscapes is located in the south part of Xingyi city of Guizhou Province stretched for 15 kilometers. The peak of the mountain was thick and fantastic, which was very vigorous and magnificent. The whole shape is very beautiful, which had created the rare Fengling gallery in the world. Wanfengling is one of the three karst landforms in southwestern China.

From the geological point of view, its north is Fenglin basin, the south central place is the Fenglin depression and peak cluster hilly area. The peak forest and peak cluster are tapered, which can be ranked as the tapering karst museum of China. The two southern and northern sections of peak forests in Xiawutun also have distinctive features of its own. The northern peak forest looks like the screen, safeguarding the stockade villages and the fields. 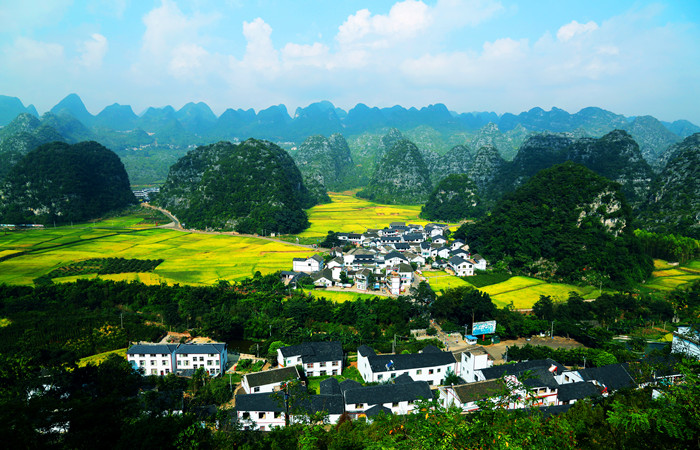 The place is blessed with a forest of picturesque cragged peaks, farm dam like a huge colored tapestry, the water of river like the belt, stockade villages as many as clouds, which is rich in poetic and artistic conception, like the simple and lucidly clear brocade of Bouyei nationality. Yet in the south central Nahui village district, finally all you could see the individual picturesque cragged peaks springing from the ground, which was fanciful, tall and graceful. They present an infinite variety of shapes, counterchanged and extremely permeable feeling.

During the summer, visitors could stand on Guanfeng passage and look down into the individual ridges and peaks distributed uniformly around the green seedling bed, like the translucent jade tray beneath the individual emeralds. The marvelous peak forest district contains almost all mountainous shapes of the tapering Karst area, with rivers, karst caves, subterranean rivers and funnels. 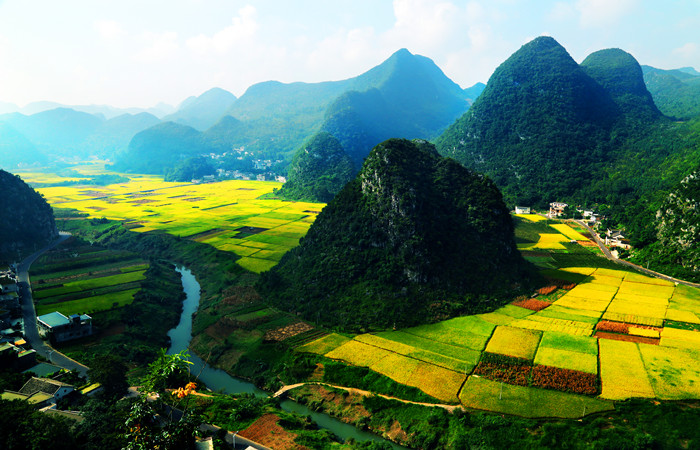 There are over 30 funnels of all shapes and sizes in the western Fenglin Scenic Spot, which had formed one funnels wonder. The place could also be the most typical, the most complete and the highest concentrated place of the tapering karst development in China. The featured Wanfenglin Scenic Spot is an important part of Maling River Valley in Guizhou as one national-level scenic spot, which has since ancient times been considered a spectacular sight by a few experts and visitors.