Where have the Nine Million Bicycles of Beijing Gone

From my point of view a bicycle is an item that has a great sense of time, this item of our generation holds a lot of memories from our youthful years. However, today the bicycle is often associated with the weather… I can’t seem to remember when the number of cyclists on the streets and roads of Beijing began to get scarce, no one dares to cycle anymore, where have all the cyclists gone? To all the cyclists out there please come back, once you all begin to cycle again the sky will be clear and blue!

Outside Soloist Coffee Shop there are several pretty bikes, I’m guessing the owner is a fan of collecting bikes. 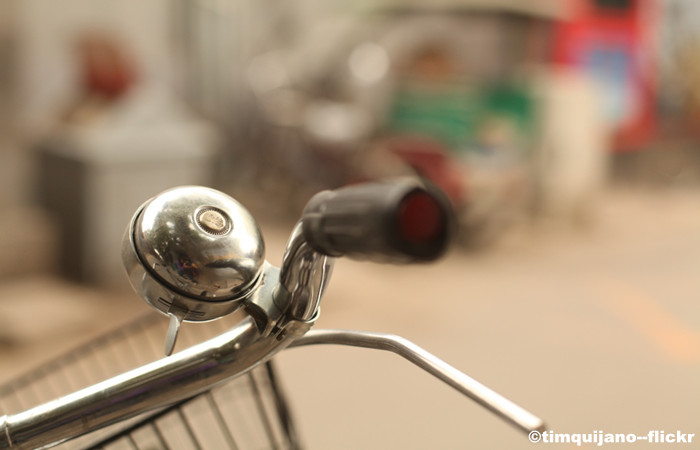 Hidden at the back of a courtyard is a the traditional 28 Inch Bicycle. The owner of the bike is an elderly gentleman who cycles to work.

Back in the old days a family that had a bicycle was sign of prosperity in the city. Perhaps most people’s first impression of Beijing is like from the scenes of the film “Beijing Bicycle” and “In the Heat of the Sun” where you can see a sea of cyclists roaming through the streets and hutongs of Beijing accompanied with the constant ringing of bicycle bells. However, over the course of a few short years this scene is now very rare in Beijing.

Behind this red wall is the famous Yonghe Palace.

Amongst all the rubbish and junk is a brand new fixed gear bike.

My favorite restaurant where I love to tuck into noodles after a long day at work. Outside are two old Phoenix brand bicycles which have become“decorations”. 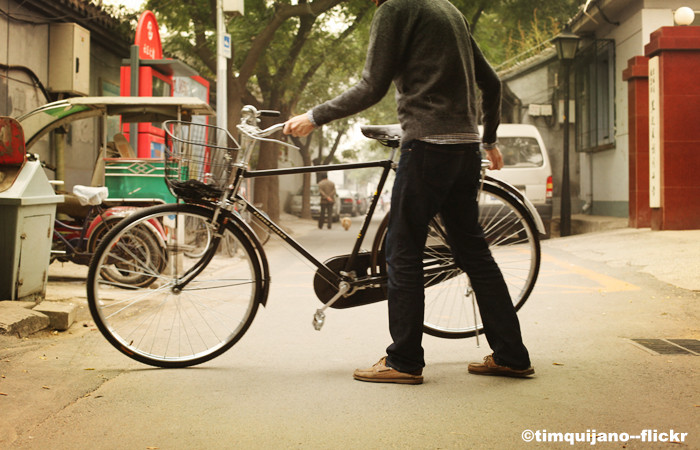 Having lived in Beijing for two years I spent half of my time living in the old city area. Beijing’s hutongs are filled with stories in the morning you can see the elderly men taking out their pet birds for a stroll and the elderly ladies cycling to the market to buy groceries. The hutongs are alive with the children playing games and football and in the background are the traditional courtyard houses that have gardens with trees filled with birds, there is amazing scenery everywhere. I once had a dream of owning my own bicycle and roaming the lanes and alleys of the hutongs.

Winter in the Cangjingguan Hutong, this rusty bicycle frame shows the piercing cold weather of Beijing.

White bicycle in Mengji Guozijian Store, although I was told photographs were not allowed I still managed to snap a photo of the vintage bicycle after apologizing to the staff.

My collection of bicycle photos began in the hutong, I first noticed the bicycles on my work one day where I had woken up extra early and decided to take a detour to buy breakfast. It was very sunny that day and I had plenty of time and noticed some things which I usually didn’t that day. I seen a bicycle at the corner of the street and took a photo using my phone. Then I realized that each bicycle has its own story, some bicycles had been deserted in the hutongs for years even the bike locks had rusted, some had no seats, some had no tires. However, no one treated the bicycles like rubbish, they were more like historical relics of the city, having outlived there time.

Yangmeizhu Xiejie, this bike belongs to Tony, the owner of the bookstore.

First time visiting the Vaidurya Café and as soon as I entered I felt like I had been transported back to the 40s. Then I realized the owner was hosting a qipao party and I even spotted a vintage black framed bicycle.

Once I started my collection of bicycle photos I found that there were more and more new bicycles, from the colorful fixed gear bikes to the mountain bikes that would appear in the hutongs, you must think that the scene is rather strange but the fact is in Beijing old merges with new and creates a new fusion.

Beijing Design Week one year ago, the bright blue background compliments the bicycles.

Although the sun is scorching, it seems that summer is reaching its ends with the fall of golden leaves.

When I was younger I always dreamed of becoming a postman, I thought the idea of whizzing through the streets and alleys and handing people their mail was once of the coolest jobs in the world. Then I realized one day that bicycles were replaced with motorcycles, as time went by the number of jobs that required bicycles were becoming less and less.

Accidently walked into a worn out glass factory where a bicycle was left to rust amongst the autumn leaves.

Due to the rapid urbanization of Beijing the bicycle as a form of transportation is branded “slow” and no longer suitable for the city’s fast lifestyle, there are still people who still reminisce of the old times and still continue to cycle. What I found was that the bicycles were no longer the main concept of the photos, but it was the changing scenes of the city that seemed to capture the eye of the people. From my point of view the bicycle will slowly lose its original significance due to the fast growth of Beijing but its worth noting that the bicycle gives us an incomparable experience that other forms of public transportation cannot. There are times were we need to slow down to enjoy the beautiful scenery.