With an area of 8,000 square meters, the White Pagoda Hill Park was is a pure white building regardless ofr its green top, which greatly enhances the glamour of the whole building. The White Pagoda is also regarded as a landmark of White Pagoda Park, even the Lanzhou City.

It has three stately and magnificent ancient architectural clusters which are built harmoniously with the surrounding landscape and the White Pagoda Mountain behind. The park was named after the White Pagoda Temple that crowns the summit of its steeply terraced slopes. The nearby bridge, Zhongshan Bridge, was the old crossing point for travelers and merchants who were then to head north on the Silk Road.

The pagoda is seven-storied octagonal shaped with a height of 17 meters. The ivory tower is delicately decorated with eight carved figures of Buddha allover and iron reins hanging under all corners of eaves. This temple was first constructed in the Yuan Dynasty (1271-1368 AD), allegedly under orders from the despot Genghis Khan to commemorate a Tibetan lama. The present White Pagoda Temple was mainly rebuilt and expanded in Ming (1368-1644 AD) and Qing (1644-1911 AD) Dynasties. Legend has it that the White Pagoda was built in honor of a well-known Tibetan Lama who died of an illness in Lanzhou when on his way to Mongolia as representative of the leader of Sakyapa in order to meet Genghis Khan, founder of the Yuan Dynasty (1271-1368).

Unfortunately, the original pagoda later toppled down. The present White Pagoda was constructed by an official in the reign of Emperor Yingzong of the Ming Dynasty (1368-1644), and later extended by an imperial inspector in Qing Dynasty (1644-1911).

The mountain was once famed for its 'Three Treasures', the Elephant Skin Drum, Bronze Bell, and Redbud that withered long ago. Because Baitasi boasted three treasures-a drum made of elephant skin, a bronze bell, and a shiny-leafed yellow horn. The tree was planted by Yunxuan, abbot of Ci'ensi (Temple of Grace) but died for lack of water long ago. The other two treasures are still extant.

The Park boasts luxuriant forests and ancient buildings in Ming and Qing dynasties, which attracts both local residents and the Westerners. After many years' forestation, the park has taken on a brand new look and now the trees and grass here are luxuriant.

Special features of the park are the Mysterious Yellow River Stone Hall and the Yugur Reception Counting House the likes of which may not be found elsewhere. If one has an opportunity to visit this park, a climb to the top of pagoda should not be missed, as it affords a bird's eye view of the whole of Lanzhou City. One can also feast one's eyes on the magnificent view of White Pagoda Mountain with the Zhongshan Bridge at its foot.
The way in which the bridge and mountain in White Pagoda Park complement each other to form picturesque scene has meant that together they have become a symbol of Lanzhou City and very much a 'must see' for travelers. 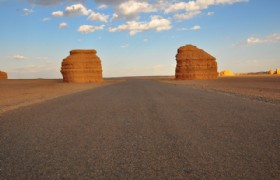