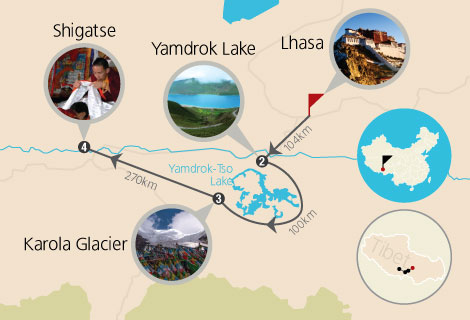 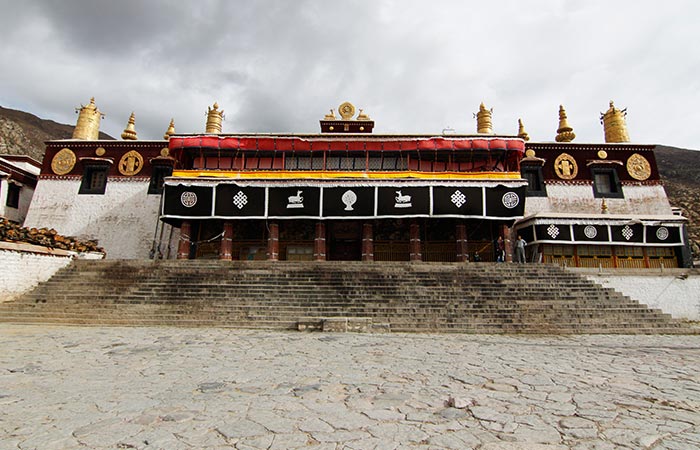 Duration: 6 Days
During this magnificent 6 days tour of Tibet you can join in the festivities of the Shoton Festival and learn of the Tibetan culture. Also see the Karola Glacier and Tashilunpo Monastery in Shigatse.
> Book Now
100% SATISFACTION
My order
If you have exchanged email with us and received all necessary information, please type your order number here, pay now to secure your booking.
Pay Now

Book Now
Day 01 Arrival in Lhasa
Detailed Itinerary: You will be picked up from Lhasa Gonggar airport or the train station, you will then be driven from the airport to your hotel. No more activities will be arranged for today. This is the best time to acclimatize to the high altitude.
Attractions & Activities:
Meals: No Meal

Day 02 Lhasa
Detailed Itinerary: In the morning you will be driven to Drepung Monastery between 4:00AM – 5:00AM. Once you arrive you will then take a 2 kilometer morning walk to see the unfolding of Thangka ceremony. After, you will visit Norbulingka in the afternoon.

Norbulingka: The Norbulingka Palace in Tibetan means “Treasure Park” and is the largest man-made park in Tibet. The palace first underwent renovations in 2003 and has continued to be restored and expanded to its present day glory.

Day 03 Lhasa
Detailed Itinerary:
After breakfast at the hotel, the first place to visit is Potala Palace, the landmark of Tibet. The Potala Palace is located in the northwest of Red Hill in Lhasa, the capital of Tibet. The whole building occupied over 100,000 square meters and the steps of the palace are leaned to Red Hill from foot to peak.
Next we will move to visit the Jokhang Temple, it is the religious heart for Tibetan Buddhism and there are many devout Buddhism adherents come from other places around Tibet to show their sovereign respect here by using their knees and hands pray on the floor.
Then we visit Barkhor Street. It is the most famous street in Tibet. The Barkhor Street was built to circle the sacred Jokhang Temple, making it one of the most sacred places in Tibet. There are pilgrims from everywhere to worship and chant in the street. Strolling along this street you will have a quick view of Tibet and Tibetan life.
There are houses and buildings of Tibetan styles standing alongside the street. Along Barkhor Street there are more than 300 stores and stalls selling various kinds of commodities and you can buy various kinds of souvenirs and gifts.

Barkhor Street: The Barkhor is an area of narrow streets and a public square located around Jokhang Temple in Lhasa, Tibet.

Potala Palace: It is named after Mount Potalaka, the mythical abode of Chenresig or Avalokitesvara. The Potala Palace was the chief residence of the Dalai Lama until the 14th Dalai Lama fled to Dharamsala, India, during the 1959 Tibetan uprising.

Yamdrok Lake: Yamdrok Lake is one of the three largest sacred lakes in Tibet. It is over 72 km (45 miles) long. The lake is surrounded by many snow-capped mountains and is fed by a lot of small streams.

Day 05 Shigatse - Lhasa
Detailed Itinerary: After breakfast at the hotel you will visit Tashilunpo Monastery, later you will head back to Lhasa.

Day 06 Depart from Lhasa
Detailed Itinerary: Once you have finished breakfast at the hotel you will be transferred to the airport or railway station.
Attractions & Activities:
Meals: Hotel Buffet Breakfast

* This is a private tour, only you and your family or friends will be in this tour. If you need any changes of itinerary or hotel etc., please contact our tour advisors, we can adjust the tour for you.
* Prices may vary according to your travel time and are higher in the high season, e.g. Labor’s Day, China National Day Holiday, and Chinese Spring Festival. * If only one person is traveling then the single room supplement is not required. If, for example, three people book a hotel, with two in one room and one in another room, the single room supplement must be paid.  * You will enjoy more discount if there is more people join the tour.
*The tour price shown above is for group size of 4 adults.